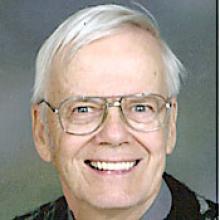 DAVID WALLACE SHAW 1932 - 2008 The family of David Shaw announce his passing on February 12, 2008. He is survived by his wife Victoria (nee Magnusson), his sons, Kurt (Karen), Earl (Stephanie), granddaughter Claire, sister Kay Lowdon, brother Ian (Jean), sister-in-law Amy, brothers-in-law, Harold (Helen) Magnusson, Marvin (Roberta) Magnusson, Norman Magnusson (and friend Lois) as well as many nieces and nephews. David was born to Earl and Florence (Anderson) Shaw, a farm family from Swan River. He graduated from Brandon College and the University of Manitoba and pursued a career in education. He felt privileged to have had the opportunity of teaching in various locations: Binscarth, Roland, Winnipeg (River East, Seven Oaks, Winnipeg #1), 2 Wing France, Ormstown, Quebec and Treherne. David was a man who enjoyed life's simple pleasures. He never forgot his rural roots and derived great pleasure from the outdoors, observing nature, feeding the birds, gardening and cross-country skiing. He was a voracious reader and an avid student of current affairs. His passion for preserving the environment through recycling and composting was evident long before it became mainstream. David was involved in his community. While serving on the Treherne town council he developed a keen interest in urban reforestation, dedicating himself to nurturing new beginnings for all to enjoy. He was a lifetime member of the Manitoba Liberal Party, a member of the Masonic Order, Treherne Bowling Club and Delahunt Golf and Country Club. He was a faithful adherent of the United Church. The family would like to express heartfelt thanks and appreciation for the care provided to him by the medical teams at St. Boniface Hospital. Special thanks to the staff of the Dialysis and Geriatric (4B) units. A memorial service celebrating David's life will be held on Saturday, February 16, 2:00 p.m. at the Treherne United Church. A private family interment will take place at the Hnausa Cemetery. If friends desire, donations in David's name may be made to the Cancer Research Society. Gilbart Funeral Home, Selkirk in care of the arrangements 1-800-230-6482 assisted by Budz's Funeral Service of Holland.