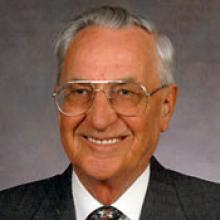 JOHN PETRASH Petrash, John of Lower Onslow while surrounded by his loving family was called home to be with the Lord on March 28, 2008. Dad was in his 74th year. John was born on May 14, 1933 in Sundown, Manitoba, to Joseph and Anne Petrash (Happychuk). He graduated from the Manitoba Normal School in June, l954. After serving for 10 years as a teacher, John ventured into the business arena where he stayed until retirement in 2005. A natural at sales and management, John was promoted several times before taking the helm as the first branch manager for the World Book Encyclopedia in the Atlantic Provinces. Under his leadership, John managed the branch successfully until 1974. For three consecutive years he was recognized by World Book as one of its five best managers in North America. John was at the top of his field when he was invited to take over management of the Atlantic Travel Service in Truro, NS. This was Dad's dream job and was a challenge he accepted and carried out successfully. John specialized in group tours and left his community a legacy of travel. Through John's efforts, dedication and integrity, he assisted and enabled numerous people in Nova Scotia and throughout Canada to realize their dreams to travel world-wide. It was a privilege and responsibility for both Dad and Mom to work with the Veterans at the Royal Canadian Legion and organize and escort tours for the Legionnaires every five years from 1985 until 2005 to commemorate the Liberation of Holland. Dad's hard work with dedicated educators saw scores of high school students from CEC, South Colchester High School and East-Hants Rural High School receive their first experience of international travel. From 1977 until the early 90s, the annual March Break High School Trip became a tradition that provided an opportunity to create lifelong memories while visiting countries such as Switzerland, Spain and the former Soviet Union to name just a few. By 1990 John became the owner of Atlantic Travel Service until he sold the business in 2000. Dedicated to community service, John volunteered to work with the Onslow Belmont Fire Brigade for 30-plus years, including 25 years as secretary. John provided an endowment that established an annual award as well as a coveted cash bonus to the Most Improved Fireman of the Year . John was a charter member of the St. Andrews Ukrainian Catholic Mission and a member of the Halifax-Dartmouth Ukrainian Canadian Association where he served as the association's president for two consecutive terms. He was a faithful member of Immaculate Conception Church in Truro. Although John strived for success in all his endeavors, he also enjoyed life on his terms. Dad loved to travel, but when at home he enjoyed gardening, reading and outdoor work. Ever the consummate chef, he had a passion for barbequing in the outdoor fireplace he built for that purpose. John especially enjoyed playing cards with his buddies at the fire hall every Thursday night. John is survived by his loving wife Pearl of 50 years and their three sons: Tim (Elizabeth), Winnipeg; Mel, Toronto; Gerry (Miki) in Sapporo, Japan; three precious grandchildren; Kathleen, Winnipeg; Maria and Joe, Sapporo, Japan. John is also survived by his two brothers; Matt (Lena), Steinbach, MB; Walter (Anne Corky), Burlington, Ont.; his sister, Olga Chorney, (Basil), Camano Island, Washington; numerous cousins, nephews and nieces. He was predeceased by his parents, brothers Bill, Steve, Orest and sister, Marie. Although John's career took them far from their roots in the Prairie Provinces, John and Pearl maintained close ties and always extended a warm Nova Scotia welcome to all their family and friends who came to visit them from various parts of the world. Cremation has taken place. You are cordially invited on Tuesday, April 1, 2008 at 2:00 p.m. to the Liturgy, conducted in the Eastern Rite Ukrainian Catholic tradition and translated into English with Fr. Roman Dusanowskij of Sydney officiating, followed by a Firemen's Tribute at Immaculate Conception Church, 669 Prince Street, Truro. Honourary Pallbearers are Walter McElhinney, Wayne Onda, Eric Devanny, Ronnie Crowe, Vaughn Dickie and Leo Morrow. A reception will be held at Campbell Hall. Interment will be in Sundown, Manitoba at a later date. John's family would like to express their sincere thanks and gratitude to the doctors, nursing staff, the palliative care unit at the Colchester Regional Hospital and those that were able to visit Dad and assist his family during this time. In lieu of flowers, donations in John's memory may be made to Colchester Regional Hospital Palliative Care Unit, or the Onslow Belmont Fire Brigade. Arrangements are entrusted to the Colchester Community Funeral Home in Truro. Messages of condolence may be sent to the family by visiting On Line Tributes at www.colchestercommunity.com