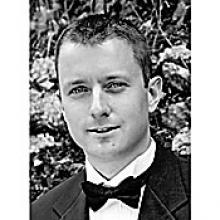 PHILIPPE CAMILLE ALLARD Phil was taken from us suddenly on March 28, 2008. He is survived by his grandparents Therese Allard, Arcade and Therese Vermette; his parents, Laurent and Henriette; his brother, Daniel; his parents-in-law, Ken and Karen Woo; and the love of his life, Andrea. His kindness, gentle manner, generosity, and quick wit made him a cherished friend to countless people. He achieved tremendous professional success and became the Chief Financial Officer of A.D. Williams at the age of 33. He was an extraordinary athlete and a strong supporter of junior athlete development. He was a top national badminton player, and was quickly becoming a threat on the squash scene as well. His memorial service will be held Saturday, April 5 at 10:00 a.m. at South Side Memorial Chapel, 8310-104 St., Edmonton, AB. Reception to follow at the Royal Glenora Club. A joint public tribute in honour of Phil, his best friend Reagan Williams, and his trusted colleague, Rhonda Quirke, will be held Sunday, April 6 at 2:00 p.m. at the Winspear Centre. Donations in lieu of flowers may be made payable to Andrea Woo in trust for the Phil Allard Memorial Fund, P.O. Box 22544, Southbrook, P.O. Edmonton, AB T6W 0C3, in support of athlete development. A Catholic service will be held in Winnipeg on April 12, 2008 at 1:00 p.m. at Mary, Mother of the Church, 85 Kirkbridge Dr. South Side Memorial Chapel. Patterson, Mittelstadt and Justik. Edmonton, AB. Ph: (780) 432-1601. To send condolences visit, www.southsidememorial.com