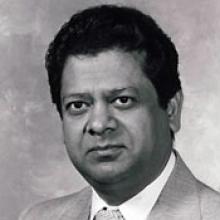 PROFESSOR NARAIN GUPTA MA, LLB, PhD, FRSC 1936 - 2008 Professor Narain Gupta, Distinguished Professor of Mathematics at the University of Manitoba and Fellow of the Royal Society of Canada, passed away peacefully on April 11, 2008. Professor Narain Gupta was born in Jammu, India. After his Bachelor's degree from his home-town, Narain joined Aligarh University where he completed his Master's degree in Mathematics and his degree in Law simultaneously. While studying mathematics on a CISR junior research fellowship in Aligarh, Narain accepted a scholarship to the Australian National University where he obtained his PhD. After teaching briefly there, he joined the University of Manitoba, arriving in Winnipeg on July 1, 1967 with his wife Prof. Chander Kanta Gupta and family. He pursued Representation Theory of Combinatorial Groups with great distinction throughout his career. He became a Full Professor in 1973, a Distinguished Professor in 2000, and Distinguished Professor Emeritus in 2005. He authored or co-authored more than one hundred papers and articles in leading mathematical journals. His work was internationally recognized by many awards and distinctions including Fellow of the Royal Society of Canada, the Killam Fellowship, and Senior NATO Scientist Award. He gave hundreds of talks in many countries and developed truly international group of collaborators from countries that included India, Russia, Japan and the United States. His solution concerning a conjecture to the elusive dimension sub group problem is one of his finest achievements, earning him a place in The Encyclopedia Brittannica. His editorial contributions to journals include Communications in Algebra, The International Journal of Computations and Algebra, The Journal of Group Theory, and The Journal of Indian Mathematical Society. Books and monographs include Contemporary Mathematics published by the American Mathematical Society and by the University of Manitoba on Burnside Groups and Related Topics. He was adored by his wife Professor Chander Kanta Gupta. He was very dearly loved by his children Neeru (Yeni Hasan), Kashyap (Rishma) and Sonya (Armando) and grandchildren Narain, Shiv, Jasmine, and Mariah. He was a loved brother of Som, Vishno, Yog, Ram, Sham, Omkar, Manorma, Rehka, and Kamlesh. He was loved by his many friends for his vibrant and passionate nature and kind and sincere friendship. His memories will be forever cherished. Funeral service will take place on Tuesday April 15, at 2:00 p.m. in Thomson In the Park Funeral Home, 1291 McGillivray Blvd followed by evening prayers and Shantipadh at 7:00 p.m. at the Hindu Temple, 999 St. Anne's Road, Winnipeg. Thomson In the ParK Funeral Home and Cemetery www.thomsoninthepark.com 925-1120 Life stories may be shared with friends and family across the globe at www.mem.com