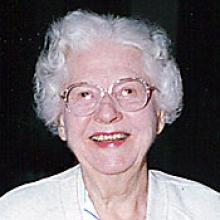 MADGE OLWYN STEVENS It is with sadness we announce the passing of Madge Stevens on April 30, 2008 at the St. Boniface Hospital at the age of 90 years. Madge was born in Winnipeg, the only child of the late Emily A. and Frederick G. Stevens. She attended the Winnipeg public schools, Wesley College (now the University of Winnipeg), and the University of Manitoba, receiving the degrees of B.A., B.Ed., and the M.Ed. She also studied at Northwestern University in the United States and at Oxford and the University of London in England. She chose teaching as a career and worked for the Winnipeg School Division No. 1 as an elementary teacher, primary supervisor, vice-principal, and principal. She was chosen as one of the first three teachers to implement both the Adjustment Teacher Service and the Major Work Programme for the Division. She spent one year on loan to the University of Manitoba as an associate professor in the Faculty of Education. Madge had a lifelong interest in music. She trained school choirs and was a student of piano and pipe organ, attaining her A.R.C.T. diploma in organ performance. She was a church organist for many years. She was also a member of McClure United Church Bell ringers, the Ding-a-Lings , which she enjoyed for many years. Madge was a member of the former Greenwood United Church for which she served as an elder for several years, and became a member of the McClure United Church on the amalgamation of Greenwood and Chalmers Churches. She is survived by her cousins: Doris Chapman, Gillian Houghton and Glenys Miles, with whom she spent many wonderful times in England. Madge will be missed by her many friends and companions in Winnipeg. A luncheon and gathering of friends will take place on Wednesday, May 14, 2008 at 12:30 p.m. at Chapel Lawn Funeral Home, 4000 Portage Ave. Scheduled transportation can be arranged, please contact the funeral home for more information. If friends so desire, donations may be made to McClure United Church, 533 Greenwood Place, Winnipeg, MB, R3G 3M1 or to a charity of your choice. CHAPEL LAWN 885-9715