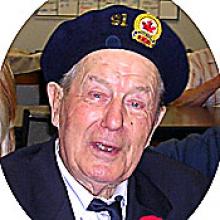 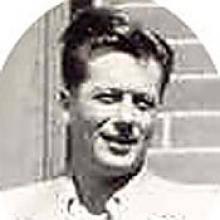 BUI OSCAR FREDRICKSON Home is the hunter, home from the hill, and the sailor home from the sea. - Robert Louis Stevenson Bui Oscar Fredrickson, husband, father, grandfather, fisherman, hunter, trapper, and veteran of the Second World War, passed away on May 11, 2008 at the age of 86 years. He is survived by his wife, Lois; his daughters Jaye (Ian) and Joanne (Allan); his son Walter (Starr); his grandchildren Lachlan, Ashley, Robert, Laura, Kelly and Joey; and great-grandson Trent. He was predeceased by his father, Oscar, his mother, Nellie, and his sister, Norma. Bui was born November 22, 1921, to Oscar Gunnar Fredrickson and Nellie (Petronella) Bjornsdottir Crawford, in Winnipegosis, Manitoba. At the age of 14, he joined his father in the family fishing business at Channel Island and Oscar's Point on the North Shore of Lake Winnipegosis. At age 18, he enlisted in the Royal Canadian Navy and served in the Battle of the North Atlantic. He was especially proud of his service as a signalman aboard Motor Torpedo Boats #735 and #797, while stationed in the United Kingdom. One example of his bravery is cited in Champagne Navy: Canada's Small Boat Raiders of the Second World War: Signalman B. Fredrickson, who was on the bridge when the others were wounded, took over the Coxswain's position at the helm without orders and handled the ship throughout the engagement in a highly commendable manner. (p. 238) He married Lois Dawn Tomes of Oakville, Manitoba on April 8, 1950. After retiring from commercial fishing, Bui worked as a marine engineer for the Department of Public Works on the dredging operations of Lake Winnipeg and Lake Winnipegosis. The big lakes were his life, and it was on or near the water that he was always most at home. Fiercely independent, and a very private person, he was at the same time a strong supporter of his community and the organizations that sustained it. He was a founding member of the Winnipegosis New Horizons Centre and a contributor to many local projects throughout his life. When Lois fell ill with Alzheimer's, Bui devoted his life to her care, and when he could no longer care for her at home, he visited her faithfully three times every day at the Personal Care Home for six years, until he joined her there on the day of their 58th wedding anniversary, April 8, 2008. The family wishes to express their appreciation to the staff of the Winnipegosis Hospital, the home care service, and the Personal Care Home for all the care that Bui received. A special thanks is also extended to Pauline, Linda, David and Carol, Danny, Gerald and Stella, and cousins Michelle and Rene, for their generous support. Funeral service was held on Friday, May 16, 2008 at 2:00 p.m. from the Winnipegosis United Church with the Reverend Ilene Dowd officiating. Interment followed in the Winnipegosis District Cemetery. In lieu of flowers, donations may be made to the Alzheimer Society, or the Winnipegosis New Horizon's Centre. Sneath-Strilchuk Funeral Services Dauphin, Manitoba (204) 638-4110