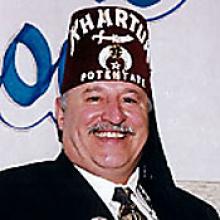 TOM DERHAK Tom Derhak passed away unexpectedly at the Queen Elizabeth Health Centre, Halifax on July 19, 2008, five days after his 68th birthday. Tom began his time with the Naval Reserve as a Sea Cadet in 1960 retiring his Commission in the late 1970s as an Executive Officer. Tom joined the Winnipeg Fire Department in 1961 retiring in 2000 as the Acting Deputy Chief. Tom spent several years as a Training Officer with the Fire Department Training Branch and furthered his education in Public Sector Management. He loved the Fire Department and was one of the innovators of the development of the current Fire Department flag. He was also the one to develop the Honour Guard for the City of Winnipeg Fire Department. In 1977 he joined the Masonic Lodge, Ancient Landmark #3 in Winnipeg. In 1980 he became a member of the Shrine of North America, Khartum Temple. He played the Base Drum for several years with the Drum Bugle Corp. He was also Assistant Director of Works Operation of the Shrine Circus in Winnipeg. In 1990 he was the Manpower Chairman of the Shrine Circus Committee, Khartum Temple, Winnipeg. In 1991, he was appointed to the Executive of Khartum Temple. In 1993, he was appointed to the Board of Directors of Children's Rehabilitation hospital and was on the Board for Koates for Kids for needy families. In January 2000 he became Potentate of Khartum Temple of the Shrine of North America. After retiring, Tom and Marianne spent many happy years in Florida deciding to make a final permanent move to Bridgewater, NS in July 2005. He then affiliated with Acacia Masonic Lodge #39 in Bridgewater, NS where at his passing he was the Worshipful Master of the Lodge. He also affiliated with Philae Temple in Halifax, where he joined the Bridgewater Shrine Club and enjoyed many parades and functions as Pumper the clown. He took such great pleasure in helping his kids. At his passing, he was also on the Committee for the 2010 Shrine North Eastern Conference. He leaves to mourn, his beloved wife of 19 years and best friend, Marianne; his daughters, Tricia (Pat Burke) of Rapid City, SD, Deanna of Victoria, BC and four grandchildren. His mother Clara Derhak of Winnipeg; brothers, Larry (Diane) of British Columbia and Gerry (Joy) of Winnipeg. Tom has left a huge void that will never be filled. Rest in Peace my Love. A memorial service for Tom will be held Thursday, October 16, 2008 at 2:00 p.m. at the Shrine Temple, 1155 Wilkes Ave., Winnipeg, MB. In honour of Tom's memory, please send donations to the Shrine Hospital for Children, Transportation Fund, Khartum Temple, 1155 Wilkes Ave., Winnipeg, MB R3M 0A5 or Philae Temple, 3530 Connolly St., Halifax, NS B3L 3R3. Please NO flowers.