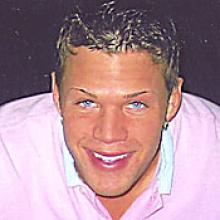 CHAD RANDALL DAVIS August 16, 1985 - February 6, 2008 Chad was tragically taken away from us on the afternoon of February 6, 2008. The boy with the beautiful blue eyes has left us and our lives will never be the same. Chad is survived by his parents, Lori and Stuart, brother Kyle, sister-in-law Kaleigh and his loyal canine friend, Joey. Chad is also survived by his grandparents, Art and Bev Bryant, Pauline and Leo Davis; aunts and uncles, Susan Bryant, Carol Brooks (Don), Ross Bryant, Paul Bryant (Sherri), Gail Davis; cousins, Matthew, Kirstie and Joshua Brooks, Kaden and Ty Bryant and Scott Davis; great- grandmother Lorna Will; and girlfriend Courtney. He was predeceased by his Uncle Chris Davis in February 2007. Chad was the second son born to Lori and Stuart on August 16, 1985. Chad kept the Davis household on their toes for the next 22 years. Life was never boring with Chad around! He spent his first eight years growing up in St. Andrews where he loved the life on an acreage. Riding tractors and climbing trees, fences and anything else he could find was enough to keep Chad happy. For the past 14 years he has grown up in south Winnipeg. Chad kept busy during his school years playing hockey, basketball, football, soccer, and tennis. He loved all his sporting activities and felt school was a mere inconvenience when you could spend the day kicking a soccer ball. When we think of Chad, we think of his beautiful smile and the twinkle in his eye. Chad's favorite things included his x-box 360, iced tea, sitting in a hot tub, a box of timbits, a remote in one hand and cell phone in the other, McDonald's burger and fries, a clean shiny car and chilling with his friends. The family would like to thank the tremendous men and women of the Winnipeg Police Force especially Matt, Elton, Will, Bob, Randy, Debbie, Kevin, and Sylvia as well as the R.C.M.P. major crimes unit especially Chris and Bettina. Our sincere gratitude to the support we received from Child Find Manitoba especially Christy and Sandra. The past 24 weeks and one day have seemed an eternity and we would like to express our undying gratitude to George Knight of Lac du Bonnet for helping bring Chad back home to his Mom and Dad. Cremation has taken place. A memorial service will be held on Saturday, August 2, 2008 at 1:00 p.m. at Westwood Community Church, 401 Westwood Drive, Winnipeg. In lieu of flowers, donations may be made in Chad's memory to Childfind Manitoba, 615 Academy Road, Winnipeg R3N 0E7. Chapel Lawn 885-9715