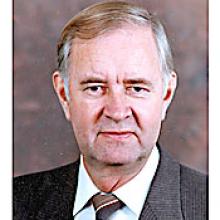 REGINALD ADRIAN EBBELING December 12, 1929 - August 4, 2008 Peacefully at sunrise Monday, August 4, 2008, Reg Ebbeling passed away at Saint Boniface Hospital surrounded by his family. Reg had a strong Christian faith and is now reunited with his family in heaven. He will be sadly missed by family and friends. He leaves to mourn his beloved wife and soul mate of 55 years Ruth. They enjoyed their cottage at Caddy Lake and numerous foreign travel adventures together. He will be deeply missed and cherished by his children Lori (Sudesh), Patricia (Nicholas), Robert (Barbara) and seven grandchildren Sarah, Alexander, Laura, Steven, Matthew, Bryan and Aleksander. He was predeceased by his parents Gustav and Elna, as well by his brothers Arthur, Leonard and sisters Elsie, Maymie and Astrid. Reg was an intelligent and well regarded individual. He was a thoughtful, mild mannered man who was respected by all who knew him. Born and raised in Manson, Manitoba, Reg was a bright young man who sought out every educational opportunity. He attended Manson School and Brandon College. He obtained his pharmacy degree at University of Manitoba in 1953, while also serving in the UNTD's. After graduation, Reg worked at the Boyd Dispensary until 1956 when he started his own pharmacy in East Kildonan. In 1967, he opened a second pharmacy in Southdale. Due to his love of learning, Reg returned to the U of M to earn his MBA in 1970. In 1973, he joined the provincial civil service. He served as the Director of the Health Industry Development Initiative, where he worked diligently to promote the growth of the health care industry within Manitoba. Some of the successful projects he was involved in included: the Virology Lab, NRC Centre, Saint Boniface Research Centre, Rh Institute, Cangene, Biovail and Vita Health. He also served as a board member of the Rh Foundation since its inception. After a successful career, Reg retired in 1995 from the government. He went on to work part time with National Health until 2000. Reg was given an award in recognition of his outstanding volunteer service to the Red Cross. In lieu of flowers, donations may be made to the Red Cross or the Heart and Stroke Foundation of Manitoba. Viewing will take place from 7:00 to 9:00 p.m. Thursday, August 7, 2008 at Glen Lawn Funeral Home, 455 Lagimodiere Blvd. Funeral service will be held at 11:00 a.m. Friday, August 8, 2008, at Lutheran Church of the Redeemer, corner of Academy and Wellington Crescent. Interment will follow at Glen Lawn Memorial Gardens. GLEN LAWN FUNERAL HOME 982-7550