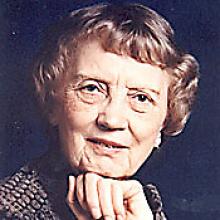 NETTIE J. SIEMENS 1911 - 2008 It is with sadness that we announce the passing of our sister and aunt, Nettie Siemens, aged 96 years, on August 21, 2008, at Victoria General Hospital. Nettie was born in a valley of the Caucasus Mountains in southern Russia. At the age of twelve, she came to Canada with her family, settling in Winkler, Manitoba. She graduated from the Winkler Collegiate after completing grade 12. Following a year at Normal School, she taught in Blumstein, Arran, and Niverville school districts. In 1947, she graduated from the University of Manitoba with a BA, and in 1948, with a BLS degree from the University of Toronto. She joined the Winnipeg Public Library staff in 1949. After holding a number of positions, she became Assistant Chief Librarian in 1959 and Chief Librarian in 1975. She retired in 1976, but stayed on staff as consultant until 1977. She was for many years a member of the Altrusa Club of Winnipeg and the Manitoba Library Association, serving as president of both organizations. She was predeceased by her parents, Jacob J. and Eva Siemens; her sister Eva Braun; brothers-in-law, Nick Braun and Ike Harder, as well as a sister and brother in infancy. Left to mourn are her sister, Anne Harder of Abbotsford, BC and her brother, John Siemens (Elly) of Winkler, MB. She will also be deeply missed by her 10 nieces and nephews and their families, Erika (John) Dyck, Gerda (Ed) Dyck, Loni Braun, Barbara (Ken) Flett, Harvey (Catherine) Harder, Vernon (Linda) Siemens, Alvin (Audrey) Siemens, Rita (Rob) McEwan, Norman (Karen) Siemens, Edwin (Debbie) Siemens. If friends desire, donations in Nettie's memory may be made to a charity of their choice or to the Winnipeg Public Library, Donations, 251 Donald Street, Winnipeg, MB R3C 3P5. According to her wishes, no memorial service will be held. THOMSON FUNERAL HOME 669 BROADWAY, WINNIPEG, MB R3C OX4 783-7211 Send expressions of sympathy at www.mem.com