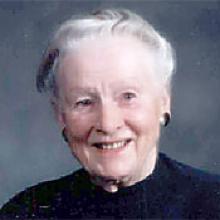 EDYTHE EHRLICH, B.Sc. H.Ec., B.Ed. 1913 - 2008 We mourn the passing of Edythe (Edie) Ehrlich, (nee Waters), on September 13, 2008 at the age of 94. Raised in Lac du Bonnet by pioneering parents Edie grew up in an environment where hard work was the norm and self-reliance was expected. She graduated in Home Economics in 1936 [Lady Stick], and belonged to The Fraternity of Delta Delta Delta. She married Frank Brown, an accomplished pilot and lived in several Canadian cities during the Second World War while Frank provided training for aspiring airmen from Canada and England as part of the RCAF. After the war Frank joined Edie and their children Robin and Hart back in Lac du Bonnet. In 1953 Edie became the Mayor of Lac du Bonnet the first woman elected mayor in Manitoba. Following the death of her husband Frank in 1959 Edie returned to The University of Manitoba and earned a degree in education in 1963 and subsequently worked as a high school teacher. During this period Edie reconnected with Dr. Walter Ehrlich, whom she had met at university in the 1930s. They were married in 1964 and moved to Ottawa where Walter worked with Agriculture Canada. In 1968 Edie and Walter extended a work related trip to Australia into a round-the world tour to many exotic countries. They moved back to Lac du Bonnet after Walter retired and became active in community projects, including Walters chairmanship of the newly established Lac du Bonnet Health Clinic board. They continued to have a great time together until Walter's death a few years later. Edie remained in Lac du Bonnet and her home became a focal point for frequent social events with family and friends. Edie was always very gracious during these occasions and would provide an anchor around which the party revolved. Having been such a significant part of the history of Lac du Bonnet, she was the guest of honour at many community events and was given the key to the Town of Lac du Bonnet on her 90th birthday. With the help of her family, friends, and home care services, Edie was able to stay in her house and enjoy the splendid view of the lake until an unfortunate fall resulted in her being hospitalized. We are grateful for the care she received from the doctors, nurses, and staff at the Pinawa Hospital who helped to make her last days as comfortable as possible. Edie will be lovingly remembered for her bright smile and flashing eyes that lit up the room, for her generosity of spirit and openness to new ideas, for her kindness and compassion for those less fortunate, for her wit and sense of humour, and for her unerring sense of right and wrong. She was a wonderful Mom, a fascinating grandmother, a supportive mother-in-law, and a part of prairie history that will not be forgotten. Predeceased by her parents Anna Louisa and Frank Waters, brother Russell [Dorothy] Waters, husbands Frank Brown and Walter Ehrlich. Edie is survived by her daughter Robin, her son Hart and their families. The funeral service will be held at 1:00 p.m. on Sunday, September 21, 2008 at the Royal Canadian Legion Branch 164, Lac du Bonnet. In lieu of flowers, donations may be made in Edythe's memory to St. John's Anglican Church, P.O. Box 1511, Lac du Bonnet, R0E 1A0 RUSSELL'S of Beausejour, Manitoba are in care of arrangements. Call 1-866-424-6271 Toll Free or 268-2263 CANADIAN INDEPENDENT since 1941.