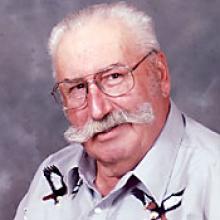 JEAN DUPONT (1932 -2008) On October 2, 2008, Jean Dupont of Saint-Georges, Manitoba, died peacefully at the Pine Falls Hospital after a lengthy illness at the age of 76. Left to cherish his memory are his brothers André and Paul (Annette), his sister, Catherine, his sister-in-law, Jeanne and many nieces and nephews. He will also be fondly remembered by many dear friends in the community and surrounding areas. Jean was predeceased by his parents, Albert and Febronie, his brothers, Pierre, Maurice and Isidore, his sisters, Evangeline, Sr. Marguerite and Sr. Maria, and a nephew, André. Jean was born and raised on a farm in Saint-Georges. He attended school at école Dupont and after Grade seven pursued his education at Collège d'Otterburne. After graduating from high school he took a course in agriculture at a specialized school in Saint-Rémi (Québec). In 1953, he returned to the family farm and farmed with his brother André until his health forced him into retirement a couple of years ago. Jean was very involved in his community and contributed immensely to its advancement. Over the years, he was secretary-treasurer of the Dupont School District and then became secretary of the Consolidated School of Saint-Georges. Having a keen interest in preserving history, he was instrumental in founding the Musée de Saint-Georges and became the first president of the Saint-Georges Historical Society. He later became the official curator of the Musée de Saint-Georges and perfected his skills by taking a course at the Museum of Man and Nature. Jean also served as councillor for the Rural Municipality of Alexander. He was also for many years the manager of the Foyer Chateauguay and Powerview Housing. The family tradition of growing peas was kept alive by Jean. For many years he harvested, cleaned, sorted and bagged (1 kg bags) peas. These bags were then sold for the making of pea soup. In 1992, the Commemorative Medal for the 125th anniversary of the Confederation of Canada was presently to Jean in recognition of significant contribution to compatriote, community and to Canada. Mass of the Resurrection will be celebrated on Saturday, October 4, 2008 at 2:00 p.m. at the Saint-Georges Roman Catholic Church with Father Dominic Lafleur presiding. Mass will be preceded by prayers at 1:30 p.m. Interment will follow at a later date in the Saint-Georges Cemetery. The family would like to extend sincere thanks to Father Dominic Lafleur for his frequent visits and prayers and to the doctors and staff of the Pine Falls Hospital for their compassion and care shown to Jean during his stay at the hospital. In lieu of flowers, if family and friends so desire, donations in his memory may be made to the Saint-Georges Historical Society, Box 171, St. Georges, Manitoba R0E 1V0 or a charity of your choice. SOBERING FUNERAL CHAPEL CREMATORIUM, Beausejour 268-3510 or MB Toll Free 1-877-776-2220