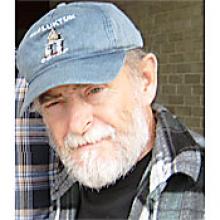 BLAIR MACLEAN It is with the greatest sadness that we announce the death of Blair MacLean on Wednesday, October 29, 2008 at Victoria General Hospital. Blair passed peacefully after suffering a heart attack. Besides his parents, Blair was predeceased by his first wife Anne, his brother Gary, and sister-in-law Monica. Blair will leave an empty space in the heart of his loving wife Marcia, his son Kevin and wife Christine, his granddaughters Maya and Samara, his son Gillis and wife Wanda, his brother Bob (Armie, Mike and Mark), his sister Janice MacKay (Bobby, Roberta, Janice-Lynn and Kathy), his cousin Sharon Currie (Mike, Michael and Kerry), his beloved nephews Paul, Travis and David MacLean, his mother-in-law Joanne Demorest, sister-in-law Shannon Uhryniuk (Eugene, Julian and Dylan) sister-in-law Michelle Demorest-Voth (Alfie, Nick and Cayden), brother-in-law Brian Demorest (Jayne, Caeleb, Eli, Sada, Molly, Greg and Andrea). He loved you all. He was born in Glace Bay, Nova Scotia on December 2, 1942. Blair was an inspiration to so many people. He was an incredible comedian, musician, artist, singer, bread maker, cook, gardener, dancer, husband, father, grandfather, brother, uncle and friend. Blair started his career in art as a commercial artist in the RCAF in 1960. He went on to develop his musical craft creating the band The Vicious Circle with his brother Gary, which lead to the formation of the notorious duo of MacLean and MacLean. They became legends in the world of Canadian comedy and toured across Canada and Europe for over thirty years. Blair saw the world through an artist's eyes. He filled our home with art and colour which transcended into his gardens in his last years. His greatest inspiration was the artist Monet. Blair's passion for life flowed over into everything he did and to everyone around him. Blair's home was always open to everyone and especially to all the children in his life. He knew how to listen to the children and spent many hours with them teaching them to draw, play guitar or sing. He loved to cook big meals for everyone and his best times were spent surrounding himself with friends and family for Sunday dinner and song. Blair was known for his ability to make people laugh, his wicked sense of humour, sharp wit, and how he always made everyone feel at home. Blair's list of friends is so large and so grand. Much like how he lived life. Your numbers are too many to mention you ALL know how much he LOVED you! Blair will always be remembered as one of a kind..they broke the mould as he is irreplaceable. Good-bye Hunny Bunny. I'll love you forever. Geezette A celebration of Blair's life will be held on Saturday, November 1, 2008 at 4:00 p.m. at Mosaic Funeral Chapel (corner of Inkster Blvd. and Keewatin St.) In lieu of flowers please make donations to the C.N.I.B. Canadian National Institute For the Blind, 1080 Portage Ave., Winnipeg, MB R3G 3M3. For online condolences or to light a memorial candle, please log onto www.mosaicfunerals.ca MOSAIC FUNERAL, CREMATION AND CEMETERY SERVICES 1839 INKSTER BLVD 275-5555