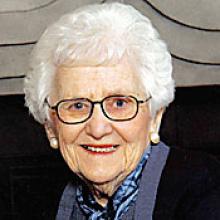 BROWNIE (CLARIS) FREEDMAN Passed away peacefully at the age of 99 at the Sharon Home, Winnipeg on October 20, 2008. Brownie was the beloved wife of the late Samuel Freedman, Chief Justice of Manitoba (1971-1983) and Chancellor of the University of Manitoba (1959-1968). She was born on March 20, 1909 in Winnipeg, one of four Udow sisters, Roselle (Abramson), Edith (Tapley) and Brownie's twin-sister Ruth (Pollock). Brownie attended the University of Manitoba then the Winnipeg General Hospital School of Nursing. She was a caregiver her entire life, first as a nurse, then as a mother and grandmother. Brownie drew people of all ages to her; she was a great listener and friend. Her many friends regarded her as a confidant who expressed a sincere interest in their lives and the lives of their families. Her zest for life did not wane as she approached old age. She played tennis at 80 (with friends who were often 30 years younger), drove a car until she was 90, and had a keen interest in the world around her, reading two newspapers daily until shortly before she died. Loving mother and mother-in-law of Martin and Roxy Freedman, Winnipeg; Susan Freedman and Bill Galloway, Vancouver; and Phyllis and Bill Shragge, Hamilton. She also leaves her devoted grandchildren, Jacqueline Freedman, Karyn Freedman (Bruce Lynn), Lisa Freedman, Alan Silverman, Jennifer Silverman, Marla Eisenberg (Doron Eisenberg), Avi Shragge (Emilie Lavictoire), Andrea Shragge, Benjamin Shragge and Rebecca Shragge and great-grandchildren, Ethan and Talia Hrabinsky. Brownie will also be greatly missed by her best friend Veronica Mensforth. Donations in memory of Brownie Freedman may be made to the Brownie and Samuel Freedman Fund of the Jewish Foundation of Manitoba, (204) 477-7525, or www.jewishfoundation.org