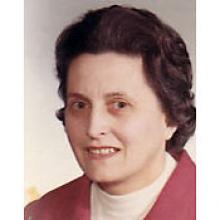 ANNE WAWRYKOW (née KASCHAK) Anne passed away late on Thursday, November 27, 2008 at the Health Sciences Centre, at the age of 89 years. She is survived by her daughter, Laara (Saul Miller), and son, Joseph Peter (Dianne), and by her two beloved grandsons, Garfield Lindsay Miller and Nicholas Wawrykow. She was predeceased by her husband Joseph (1979), her brothers John and Peter Kaschak, and her sister Mary Wonitowy. Anne was born on May 20, 1919, in Valley River, Manitoba, and spent her early years on the family farm; she always looked back on those years with great fondness. After her early schooling in Sifton and Dauphin, she moved to Winnipeg, graduating as an RN from St. Joseph's School of Nursing in 1939. She worked as a nurse at Gimli Hospital and from 1941-1943 as an airline stewardess for Trans-Canada Airlines. She married Joseph in July 1943 and together they raised their two children in Winnipeg. After earning her public health certificate, she worked as a public health nurse for the City of Winnipeg from 1960 until her retirement in 1988. Since 1945, she belonged to St. Nicholas Ukrainian Catholic Church, and was active in the Ukrainian Catholic Women's League for over fifty years. In October 2004, she became an Associate of the Sisters Servants of Mary Immaculate. Anne was a remarkable person, gifted with courage, tenacity, and a strong sense of purpose. She held education in high regard: she earned her B.A. from the University of Manitoba (1975) while working full-time, and delighted in the academic (and other) achievements of her children, and then of those of their children. Most of all, she had a deep religious faith. A daily communicant throughout her adult life, she always strove to live a life of compassion and commitment to others in conformity with her Christian ideals. Her family would like to thank the many people who were so kind to mother in her later years: the staff of the Aikins Street Community Health Centre, in particular Rose Anne Zacharias and Dr. Wyant-Crossman; Sr. Daria, SSMI; the staff of the HSC, ward A4, for their compassion in her final days; Dennis and Steffie Wawrykow; her dear friend, neighbor, and confidante, Patricia Kuzak, who so many times served as her advocate and always gave so much of herself. Prayers will be held on Tuesday, December 2, 2008 at 7:00 p.m., at Cropo Funeral Chapel, 1442 Main Street. Divine Liturgy will be held on Wednesday, December 3, 1:00 p.m. at St. Nicholas Ukrainian Catholic Church, 737 Bannerman Avenue, with Father Isidore Dziadyk, OSBM, officiating. Interment will follow at Holy Family Cemetery. In lieu of flowers, donations in her memory may be made to St. Nicholas Ukrainian Catholic Church. 586-8044