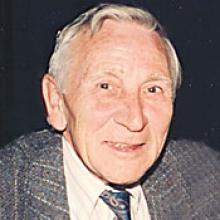 PETRUS HUBERTUS (PETER) VERNAUS Peacefully on Tuesday, February 10, 2009 Peter left us to join his beloved Clementine (Tiny). He is lovingly remembered and will be greatly missed by his children Yvonne Humphrey (Pam) and James (Nicole), his grandchildren Halie, Cassandra and Katelyn, and step-grandson Allan. He also leaves to mourn his loss his sister Maria (Netty) and brother John in Winnipeg as well as many relatives and friends in The Netherlands and Canada. Peter was predeceased by his wife of 51 years Tiny, his brother Harry and his sister Gertrude. Peter was born in the Netherlands July 25, 1929. In 1953 he married Tiny and shortly after brought his new bride to Canada. Pete immediately set to work building a life in Winnipeg. After working various jobs he opened his own autobody shop and rapidly achieved a reputation for quality and customer service. His success in business allowed him to turn his sights to fulfilling a lifelong passion, stock car racing. In 1972 he built the Winnipeg Speedway and was an icon in the racing community well past the time the racetrack was sold in 1994. Life at the track was fulfilling, sometimes challenging, and always interesting. Pete always had a story for anyone with the time to listen. He was a pioneer in the local car racing community, bringing events like the World of Outlaws and NASCAR stars including Richard Petty to Winnipeg. He was legendary for his frugal ways, but was always generous to family, friends, and even strangers who found themselves down on their luck. Pete travelled extensively with his family, visiting friends and relatives in Europe, and vacationing and attending car races in the United States. One of his favourite places was the family cabin he built at Wendigo. Summers were spent boating, fishing, searching for arrowheads and sitting around the campfire cooking his famous potatoes. Winters were for snowmobiling and spending time with family and friends. Pallbearers will be Robert Comeault, Tish Jonsson, Rudy Kessen, Dick Kolodie, Harry Pellaers, and John Vernaus. Funeral service will be held on Tuesday, February 17 at 10:30 a.m. at St. Vital Catholic Church, 1629 Pembina Highway. In lieu of flowers, donations may be made in Peter's memory to the Heart and Stroke Foundation of Manitoba. OPA, WE LOVE YOU AND MISS YOU. DESJARDINS 233-4949 1-888-233-4949