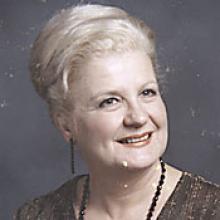 ROLANDE GARNIER It is with great sadness that we announce the passing of our beloved, Grand-Mère , Rolande Garnier (nee Rozière), at the St. Boniface Hospital on April 11, 2009 at the age of 82. Rolande is survived by her daughter Suzanne Doyle (Rolando Gilewicz); her grandchildren: Jennifer Doyle (Norman Gould); Ryan (Georgia) Doyle; Damon Gilewicz; her great- grandchildren: Keenan, Reese, Gavin, Hudson, and Kaimen; her brother Andre (Eva) and her sister Martha (Gene) Perry. Rolande was predeceased by her beloved husband Hubert Garnier and her sister Theresa Lamarche. Rolande was born June 11, 1926 in Notre Dame de Lourdes, Manitoba. She was a Mezzo-soprano who began her career studying voice with Martial Singher. Rolande was the winner of the 1952-53 CBC French-network radio competition Nos Futures Etoiles . After winning, she toured with the Musical Group of Canada in 1954 with Louis Quilico. She gave recitals on radio and TV, and appeared as soloist with orchestras, including the Winnipeg Symphony Orchestra, and the Winnipeg Philharmonic Choir. Rolande sang in Winnipeg for Golden Voices Opera (Madame Flora) in Menotti's The Medium, 1972, Opera Manitoba (Berta) in The Barber of Seville, 1972 and the Manitoba Opera Association (Suzuki) in Madam Butterfly, 1973; (Mercédès) in Carmen and (Annina) in La Traviata, 1974, (Njegus) Merry Widow, 1988. She played Madame Ernestine von Liebedich in MTC's production of Little Mary Sunshine in 1964. Rolande also starred in many productions at Rainbow Stage, including Can Can, Showboat, The King and I, Carrousel, and The Sound of Music. She continued her love of the arts and was recognized as a first-rate musician and a gifted actress. Prior to her retirement she worked for World Adventure Tours as a spokesperson and office manager. This afforded her the opportunity to continue to travel and develop a lasting friendship with the Gee family. Rolande was an amazing person. Her love of classical music, the outdoors, and travel, enriched her life. Like her father and brother, Rolande was a skilled carpenter who loved nothing better than working at The Camp on the Winnipeg River near Pointe Du Bois, Manitoba. She was an artistic, passionate woman with great energy and joie de vive . Rolande was devoted to her family and supported them unconditionally. All those who knew and loved her will treasure her memory. The family would also like to extend a special thanks to the staff at the St. Boniface Hospital whose care and compassion were greatly appreciated. At her request there will not be a funeral. A gathering of family and close friends will take place on April 18, 2009. In lieu of flowers, donations can be made in care of the Canadian Cancer Society. The Coutu family in care of arrangements: E.J. COUTU CO. FUNERAL DIRECTORS 680 Archibald St. 253-5086