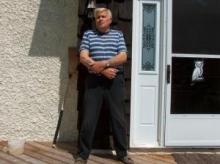 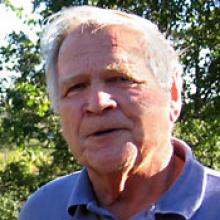 JOHN G. TAUBENSEE March 7, 1930 - April 16, 2009 The Taubensee family is deeply saddened to announce the passing of John Taubensee. John died while felling a tree and although the accident was tragic, we take comfort that he was at his favourite place, the family cottage in Clearwater Bay, Ontario with his lovable dog and companion Reesey by his side and doing what he loved, working hard outside. John married Gertrude Jesse in 1955 and together raised four daughters that were their pride and joy. Mona Taubensee and husband Michael Kelly and Susan Taubensee and husband Georges Sourisseau of Vancouver; Joanne Pooles and husband Brent Pooles and Carolin Taubensee and husband Randy Kohuch of Winnipeg, along with four grandchildren, Morgan, Kelsey, Kellen Pooles and Nicholas Kohuch. John was born in Germany in 1930. That same year, his family immigrated to Swan River, Manitoba. His parents were Mary (Schoenrath) (1907-1965) and John Taubensee (1903-1995) and stepmother Lillian (Tyderkie) (1918-2002); sisters, Hildegard Taubensee (1927-1935), Irma Valli of Scottsdale, Arizona and Ruby Lucas (1942-1995). John graduated from the University of Manitoba in 1955 with a Bachelor of Architecture and enjoyed seeing his fellow architects at class reunions over the years. John moved to Flin Flon after graduation and together with his father, began a successful general contracting business, Taubensee Construction Co. Ltd. In 1960, they moved the company to Winnipeg where they made a significant contribution by building over 100 schools and other public facilities throughout the city and the surrounding towns in Manitoba. Close to 50 years later, he was busy working on a development project at the time of his passing. Retirement was not in his vocabulary. Of all the things he built, his favourite was definitely the family cottage at Lake of the Woods. He always seemed happiest there, with a hammer in one hand to build a new deck and a garden tool in the other to tend to the beautiful lily and rose gardens. Mom and Dad were kind and welcoming hosts and enjoyed great meals at his hand-made dining table with all the family, friends and visitors throughout the years. When a full day's work was done, he loved to relax in a lounge chair on the deck and just take in the hummingbirds, wildlife and beautiful waters of Clearwater Bay. He loved the changing seasons, never complaining about the heat or bugs in the summer or the cold snowy winter, always anticipating the breaking of the ice and the start of a new season. We were waiting to hear his annual report of when the ice was off the lake. The only thing John loved more than his work and the cottage, was family. He encouraged each daughter to experience all that life had to offer. He enjoyed his trips to Vancouver to admire the beauty of spring and was so proud of the careers of Mona and Susan who followed in his footsteps in the design and construction business. He shared his passion for politics and current events with Joanne and thoroughly enjoyed her cooking at special family gatherings, most recently celebrating his 79th birthday. While he took great delight in discussing business and commerce with Carolin, he loved to share his observations of nature and the yearly adventures of the new wood ducklings hatching and making their way to the water. Each grandchild held a special place in his heart and were the apple of his eye. He enjoyed sharing his birthday with Morgan and was thrilled about one of her plans to pursue environmental design; listening to Kelsey plan her takeover of the fashion industry and New York City; watching Kellen play hockey and anticipating the upcoming football season; and sharing his love for dogs with Nicholas. He enjoyed great conversations with his dear sister Irma. She summed it up perfectly that John always did what he loved to do. Fondly known as Uncle Johnny , he adored his many nieces and nephews. He had a positive outlook and was generous in so many ways. Despite his strict and no nonsense approach, he was tender and loving and we cherish the life lessons he taught. We shall remember him with fondness and love and he will remain in our hearts forever. Please join our family for a memorial service on Tuesday, April 21st at 11:00 a.m. at Green Acres Chapel. A reception will follow. In lieu of flowers, the family would appreciate charitable donations in John's honour to the Ontario SPCA in Kenora who took such great care of Reesey. Toll free: 1-877-548-2194 or email: donate@ospca.on.ca GREEN ACRES Funeral Home and Cemetery 1 Green Acres Lane, Springfield (204) 222-3241 Hwy #1 E inside the Perimeter at Winnipeg Life stories may be shared at www.mem.com