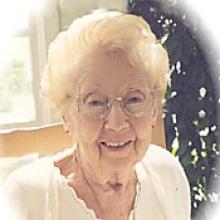 MYRA JOANNE NEWMAN August 25, 1920 - April 27, 2009 Myra Newman passed away peacefully on Monday, April 27, surrounded by loved ones. Her husband, Dr. William George Newman, predeceased her in July 2000. She is survived by her three daughters, Cynthia (Clancy), Margo (Bob), Sherrie (Cam), and her son George; eight grandchildren, Aaron (Diane), Ayrlia (Eric), Ramona (Aaron), Kristopher (Karen), Melanie (Trevor), Jason (Charlene), Gem and Shawn; and 13 great-grandchildren, Ania, Rhianna, Aria, Cassandra, Jamie, Evan, Nathan, Logan, Meghan, Morgan, Lisa, Joshua, and Bradley. Myra was born in 1920 in Millwood, Manitoba to Joanna and Donald Morrison, recent immigrants from the Isle of Lewis, Scotland. She was predeceased by her parents in 1975 and by all of her siblings, Don, Henry, Wilma and John, and by her two brothers-in-law, Philip and Richard. She is survived by her cousin Mari McLeod and two sisters-in-law, Phylliss Morrison and Elizabeth Newman, and many nieces and nephews. Myra's father worked for the CPR and she grew up in several small towns on the CPR rail line, including Millwood and Newdale, Manitoba and Carnduff, Saskatchewan. She loved playing sports, particularly baseball, and in later years she was an avid bowler and curler at the Winnipeg Winter Club. In 1939 Myra moved to Winnipeg to start her Registered Nurses' Training at the Victoria General Hospital, then located on River Avenue. She met her future husband when Bill Newman was an intern at the General Hospital. They were married in 1943 and although Myra did some private duty nursing, she became a Homemaker shortly after the war ended when she and Bill started their family. She was proud of her children and their accomplishments and even prouder of her grandchildren, and recently her great-grandchildren. We could always make Mom smile with stories of the younger generation. Myra was a wonderful cook and was always trying new things. She loved to entertain and she will be remembered for countless family dinners and parties. She made amazing birthday cakes for her grandchildren and we will always remember the wonderful Holiday celebrations that she made so special for all of her family. Myra had many interests and lived life to the fullest. She loved the ballet, and for years was involved with the Women's Committee of the Royal Winnipeg Ballet. For many years she worked as a volunteer at Things Shop and had an eye for rare and wonderful things. She had a particular passion for Royal Doulton figurines and had a wonderful collection of them. Myra and Bill had a cottage at Big Whiteshell Lake for almost 30 years where they enjoyed boating, water skiing and just being together as a family. They also enjoyed a property near Gunton, Manitoba where Myra grew enormous quantities of vegetables that they would then distribute to family and friends. She loved flowers, and in addition to her flower gardens at home, she would bring huge arms full of gladioli and other flowers in from Gunton. Myra learned to drive an ATV at the age of 70 and she and Bill and their dogs would drive all over their property checking on the wildlife they loved to feed. Myra was able to stay in her home until July 2007 at which time she moved to Misericordia Place Personal Care Home. The family wishes to thank all of the nurses and other caregivers for the wonderful care that she received for 22 months. A special thank you to her companion Carol whom she cared for deeply. At Myra's request, there will be no funeral service. If so desired a donation may be made in her memory to the charity of one's choice. Rest in Peace, dear Mother and Granny. We will all miss you so very much. THOMSON FUNERAL HOME 669 BROADWAY, WINNIPEG, MB R3C 0X4 783-7211 Send expressions of sympathy at www.mem.com