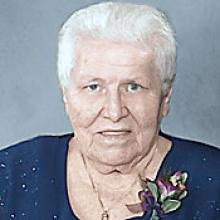 ELIZABETH (MA) HENNING 1933 - 2009 On Monday June 1, 2009 Elizabeth quietly passed away. She was 76 years of age. Born in Russia and having survived the Second World War Elizabeth immigrated to Canada in 1950 and moved to Winnipeg, Manitoba. Elizabeth married her husband Horst in 1953 and had an active and busy life, first working as an operating room nurse, then as a real estate agent, eventually running her own agency. Elizabeth, with her husband Horst, went into residential and commercial development, building houses, apartment complexes and hotels. Elizabeth and Horst's next ventures were motel and hotel operations and development, owning and operating hotels and motels in Winnipeg, Portage La Prairie, Brandon, Castlegar and eventually building and owning the Oyster Bay Resort in Campbell River, BC. One of Elizabeth's many passions was country music, owning and operating a publishing and record company in Winnipeg, Manitoba. Elizabeth assisted many local artists in establishing their careers. Elizabeth was a director for the Canadian Country Music Association for many years and President in 1985. In 2008 Elizabeth was awarded the Hank Smith Award of Excellence at the Canadian Country Music Awards in Winnipeg for her distinguished service to Canadian country music. In 1990 Elizabeth and Horst moved to Campbell River, BC from Brandon, Manitoba and were soon involved in building and operating the Oyster Bay Resort which will now be carried on by her family. Elizabeth's other great passion was fishing and she was often seen with her husband Horst out on their boat. Elizabeth was predeceased by her husband, Horst. Ma is survived by her loving family, children, Harold Henning, Heidi Howarth and Howard Henning, her seven grandchildren; Jennifer, Brenda, Jaylene, Julia, Larraine, Tristan and Nikita and five great-grandchildren. The family wishes to thank Dr. Baerg and the staff at the Campbell River Hospital for their dedication, care and compassion. Donations in Elizabeth's name can be made to the Canadian Cancer Society, Unit-B1423 16th Avenue, Campbell River, BC V9W 2E4 and the Canadian Diabetes Association 276-2950 Douglas, Victoria BC, V8T 4N4. A Funeral Service to honour Elizabeth was held at the Oyster Bay Resort, Horst Henning Hall, 4357 South Island Highway, Campbell River, BC on Thursday, June 4, 2009 at 1:00 p.m. Interment followed at Black Creek Cemetery. A reception followed the interment at the Oyster Bay Resort. Tributes to the family may be left at www.MeMcom. Sutton's Campbell River Funeral Home In Care of Arrangements 250-287-4812