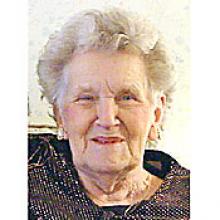 GWEN JANE AXWORTHY 1916 - 2009 On June 21, 2009 surrounded by her family and after a long and happy life, Gwen Axworthy passed away at the Poseidon Care Centre at the age of 92. Her memory is cherished by her sons and daughters-in-law, Lloyd (Denise), Thomas (Roberta), Trevor (Mary), Robert (Barbara), their families, her cousin Ira and Sadie Owen and many nieces and nephews, especially Gayla Vidal. Gwen was born in Bangor, Saskatchewan on November 5, 1916 daughter of David and Shan Thomas. The Thomas family were members of the famous 1902 Patagonian Welsh emigration to Saskatchewan and this heritage was always an important feature of Gwen's life. Predeceased by her husband Norman, her parents, and all her brothers and sisters, Gwen grew up in a large and loving prairie family. Her own lively spirit was exhibited when she was struck by tuberculosis and had to spend a year in the sanitarium but her high spirits never wavered. Her illness had the unexpected benefit of introducing her to her future husband Norman, who came to visit another patient but stayed on to share Gwen's life for the rest of his days. Norman and Gwen raised four boys and children were always the focus of Gwen's life. She had a fierce devotion to education since the hardships of the Great Depression had prevented her from attending university. She made sure that her sons would never lack for educational opportunity. When her sons matured, she became the Manager of the Happy Time Nursery where her love of children endeared her to hundreds of families. Besides family, the United Church of Canada, community service, and the Liberal Party were the mainstays of her life. She taught Sunday school, served on the Manitoba Conference of the United Church, and was a member of the church's National Audio Visual Education Committee. Her grounding in the social gospel led her to volunteer for countless charities and service organizations. She served on the National Parole Board and was always interested in prison reform. The Riverside Lionelles were another outlet for her volunteerism and one of the major projects in her life was serving on the board of the Riverside Lions Estate where she was instrumental in the expansion of the facility. Her community involvements also led her into political engagement and she helped to organize the many political campaigns of her son Lloyd. The Liberal Party of Manitoba awarded her a life membership. The death of her husband Norman in 1990 did not prevent her from continuing to lead a full and engaged life. She loved the Manitoba Theatre Centre, the Royal Winnipeg Ballet, and followed avidly the fortunes of the Winnipeg Blue Bombers. She especially enjoyed the courses for seniors offered by the University of Winnipeg and would take a bus weekly to the University to hear lectures on literature, science, and politics. She was overjoyed to be blessed by her grandchildren Michelle, David, Stephen, Caitlyn, Wynn, Jane, John and Louise and her great-grandchildren Mary Ella, Charles, Emelia, Evan, Jack and Sarah. They loved their Nanny especially when she ruled the roost at Victoria Beach. Norman and Gwen Axworthy were part of the great generation that endured the depression, won the war, built a modern Canada, and made it into a sharing and tolerant society. Gwen was raised in a loving family and community, lived these values all her life, and ensured that this ethic was passed on to her children and their families in turn. Her family and friends mourn her passing but celebrate her life. A memorial service will be held at St. Andrew's River Heights United Church, 255 Oak Street, on Thursday June 25 at 3:00 p.m. In lieu of flowers, donations may be made to the Norman J. and Gwen Axworthy Peace Education Bursary, c/o the University of Winnipeg Foundation, 705 - 491 Portage Avenue, Winnipeg, MB R3B2E4, or call 204 - 786-9995. www.uwinnipegfoundation.ca The family wishes to thank the staff of the first floor of Poseidon Care Centre for their care and affection for Gwen during her time with them, especially her last days. THOMSON IN THE PARK 925-1120 Send expressions of sympathy to www.mem.com