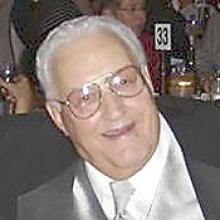 ROGER RENE JOSEPH SAVOIE July 29, 1931 - August 17, 2009 With family by his side Dad peacefully left this world for a better place on August 17, 2009 at the age of 78. Dad was predeceased by his parents Louis and Simone Savoie. He is survived by his loving partner and best friend Valdine; his four children: Mark, Kara-Lynn, Christopher and Andrea; grandchildren: Halle, Alexandra, Joey and Jocelyn; his brothers: Raymond, Aime and Guy; his sisters Estelle and Jacqueline, and many loved nieces and nephews, sons and daughters in-law. Dad was born in St. Boniface, MB and with his brothers attended Provencher School, it was there he cultivated his love of sports. Dad was a gifted athlete and competed in many sports including baseball, wrestling and hockey, but it was the game of football he chose and excelled at. Starting with the Rods in 1947 Dad went on to play 16 seasons with the Blue Bombers from 1950 to 1965, and it was these years he was so very proud to have defined his professional life in sports. Dad played in seven Grey Cups with the Bombers in his career, defeating Hamilton in four (1958, 1959, 1961, 1962). In 1956 Dad was awarded the Tommy Lumsden Memorial Trophy as the Bombers top Canadian lineman. In 1957 Dad was awarded the Order of the Buffalo Hunt, in 1962 he was named a CFL all star. Dad also captained the Bombers in 1964 and 1965. Dad is a member of the Blue Bomber Hall of Fame inducted in 1987 and is also a member of the Manitoba Sports Hall of Fame as both an individual and for his role with the 1958, 1959, 1961, 1962 Grey Cup Championship teams. After his retirement from the Bombers, Dad owned and operated the Golden Fawn Lodge near Ear Falls, Ontario, and it was during this time he cultivated a love of the outdoors in his children that is still strong in us all today. Dad enjoyed many deer seasons and fishing trips with his family and friends, ever the story teller it was at these times many will remember him. Dad coached all his children in sports as we grew, his experience and guidance making us into the people we are today. His love seldom spoken but always understood. Dad will be remembered fondly and deeply missed. His kindness and his gentle soul were the foundation of his life and will be the legacy most remembered by his family and friends. Number sixty two in the program but number one in all our hearts, we love you Dad. In lieu of flowers, memorial donations in Roger's memory may be made to CancerCare Manitoba Foundation, 675 McDermot Avenue, Room ON1160, Winnipeg, MB R3E 0V9. A Funeral Mass will be celebrated on Saturday, August 22 at 11:00 a.m. in Precieux Sang Roman Catholic Church, 200 Kenny, St. Boniface. Honorary Pallbearers will be: Gord Mackie, Gordy Rowland, Bill Todd, Nick Miller, Paul Hrynchuk, Frank Rigney. The Coutu family in care of arrangements: E. J. COUTU CO. FUNERAL DIRECTORS 680 Archibald St. 253-5086