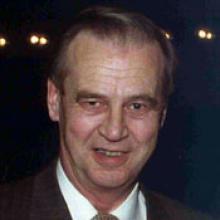 KENNETH CONRAD NORELL On September 3, 2009, Kenneth Conrad Norell died suddenly at the Health Sciences Centre in Winnipeg. Ken is survived by his wife Donna (nee Young) of Winnipeg; his sister Margaret Ritchie of Dauphin; his brother-in-law Gerald Young (Phyllis) of Parksville, BC; his sister-in-law Jean Hopper of Nanaimo, BC; his nieces Brette Ritchie (David Hunter) of Scarborough, ON, and Meredith Gordon of Surrey, BC; his nephews Michael Hopper (Yvonne) of Winnipeg, Peter Hopper (Maria Laslop) of Victoria, Patrick Hopper (Dianne McPetrie) of Winnipeg, Andrew Young (Marleen Morris) of Vancouver; his great-nieces and nephews Andrew Hunter, Krissy Hunter, Mark Hunter, Willy Hunter, Connor Hopper, Kegan Hopper, Jenika Gordon and Emily Gordon; as well as his many cherished friends. Ken was predeceased by his father Axel Martin Norell in 1958, his mother Maria Kristina (Larson) Norell in 1968, his sister Mabel Norell in 1962, his sister Alice Norell in 1981, and his brother-in-law, Dr. Gordon Ritchie in 1998. Born in Winnipeg, Ken grew up on a farm near Balmoral, Manitoba, receiving all his early schooling in that village, then later graduating from the Faculty of Arts at the University of Manitoba. For some years, he worked in Winnipeg as a radio-television writer and public relations director, taking only one year off to accompany Donna to France, where he held the position of assistant anglais at a school in Rueil-Malmaison. In 1973 Ken joined the head office of Manitoba Pool Elevators, eventually becoming Corporate Secretary, the position from which he took early retirement in 1992. In private life, Ken was known as an accomplished woodworker. Over the years, he made many beautiful pieces of furniture for family and friends. Recently he confined this activity to carving figures of ducks, geese and songbirds, some of which earned him ribbons at wildlife carving shows. Ken's garden in Charleswood also gave him much pleasure and earned him many compliments. His inability this year, because of ill-health, to keep up with the effort necessary to maintain the garden in its usual beauty distressed him immensely, as did the excessive moisture it received from the rains. Friends and relatives have been very generous with their gardening assistance, but the plants themselves miss the friend who cared for them so deeply. Ken was very fond of animals and will be much missed by his two cats Tika and Suzy. If friends so wish, they may make a donation in his memory to the Winnipeg Humane Society, 45 Hurst Way, Winnipeg, R3T 0R3 or to a charity of their choice. A brief celebration of Ken's life will take place on Thursday, September 10, at 3:00 p.m. at Chapel Lawn Funeral Home, 4000 Portage Avenue, Winnipeg. All of Ken's friends are welcome. Cremation and private interment will take place earlier. Chapel Lawn 885-9715