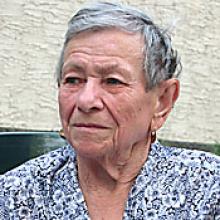 HELEN KOZLOWSKI It is with great sadness and heavy hearts that we announce the passing of our dearest mother, wife, grandmother, auntie and friend, Helen on Tuesday, September 8, 2009, peacefully at home at the age of 85 years. Remaining to forever cherish Helen's memory is her son Walter; daughter-in-law (always a daughter to you Mamusia) Beata; granddaughter Anika; grandson Conrad; nieces, nephews and cousins in Canada and Poland and many friends. Helen was predeceased by her husband of 59 years, Rudolf, her two sons Frank and Ed and her parents in Poland. Born in Poland on April 30, 1924 Helen was a mischievous child that was academically inclined. Although her schooling was cut short when she was taken off the streets of Poland and forced to provide labour for the enemy soldiers before getting transferred to a hospital in Germany. After the war, she managed to make her way to Canada with nothing more than a few belongings. Helen loved to learn and could recite poems, songs and sayings that she had learned 60 years ago, regardless of the language. Helen was special in every way. She touched many people with her kindness and the want to help everyone. She was hard working, genuine, giving, and always helping family, friends and perfect strangers. She loved her family more than anything and went out of her way to spoil her grandchildren with kindness and support. The grandchildren could always count on Babcia to cook their favourite meal, or whip up their favourite dessert. Helen was a woman who asked for very little but gave out as much as she could from her heart and hands. Never letting anyone go away hungry, Helen always made sure she had something for all of those that came to visit, especially if it was her cherished grandchildren. Helen was most dedicated to her husband Rudolf and we know that giving birth to her three sons was the best thing that could ever happen to her, given that she was an only child herself. She opened her heart to everyone and was always joyful, warm and straightforward which touched people in a very special way. There was nothing she couldn't forgive and she never judged anyone. She was our dearest Mamusia and Babcia whom we will always love and miss as this has left a void in our lives and an empty space at our table. We are grateful and honoured for having her as a part of our lives. The love she gave us will live on as our guardian angel and a bright light even in the darkest moments. There is a very special place in our hearts where she will live forever. Mass of Christian Burial will be celebrated on Friday, September 11, 2009 at 2:00 p.m., in the Holy Ghost Roman Catholic Church, 341 Selkirk Avenue, with an Oblate Father, presiding. Interment will follow in the Holy Ghost Roman Catholic Parish Cemetery, 4387 Main Street. For those who wish, viewing will be held prior to Mass. Following the interment, a reception will be held in Wojcik's Reception Centre, in Wojcik's Funeral Chapel, 1020 Main Street at Manitoba Avenue. The family sincerely thanks Dr. Pawlak for his constant attention and caring for Helen which gave us many more years of enjoyment with her. In lieu of flowers, memorial donations in Helen's name may be made to the Heart and Stroke Foundation of Manitoba, 6 Donald Street, Winnipeg, Manitoba, R3L 0K6. Wieczny Odpoczynek racz mu dac Panie