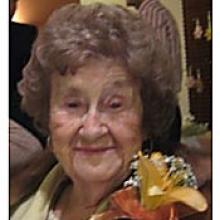 DAISY CLEMENTINE (PAT) BATES October 17, 2009 Daisy Clementine (Pat) Bates was a beautiful woman with a kind and gentle spirit. She was a blessing to all she knew and was deeply loved. She was a woman of many interests, as well as being a devoted wife, proud mother and grandmother and a loyal friend. Pat Bates (nee Pattullo) was born on June 26, 1916 at Wakopa, Manitoba, the first Canadian born to a Scottish family of nine children. They farmed at different locations, settling at Ninette, Manitoba. Pat graduated with honours as a registered nurse from the Brandon General Hospital where she earned the silver medal and the General Proficiency Award. She married Grenville Bates on August 16, 1944. Pat's career as a nurse began at Brandon General Hospital and took her to Winnipeg's Grace Hospital and Misericordia General Hospital. She also worked at the Municipal Hospitals (Riverview Health Centre) and later at Wascana Hospital in Regina. Upon retirement Pat and Grenville took over the Bates home farm at Elkhorn, Manitoba and then moved to Winnipeg where they lived until her death. Pat loved to travel. She and Grenville travelled the world extensively visiting Mexico, Cuba, Spain, Portugal, England, Scotland, Ireland, Dominican Republic, Hawaii, Israel, Brazil, Turkey, Yugoslavia and other destinations. Throughout her life, Pat enjoyed reading, golfing and curling and was an avid bridge player. She cherished her many long-term friendships and gave and received much joy spending time with her family. She had a wonderful sense of humour and style. She was strong, resilient and selfless throughout her life and tackled several illnesses in the same manner. Living her elder years with dignity and amazing grace was a stunning example to all who were touched by her. She often said that she had a very rewarding life. Pat is sadly missed by her loving husband Grenville; daughters, Diane Bates Christmas (Richard) of Calgary and Alys-Lynne (Furgal) West (Steve) of Winnipeg; son David Bates (Lynn) of Winnipeg, as well as eight grandchildren in Canada and London, England. Viewing will be held at 2:00 p.m. on Tuesday, October 20, 2009 at Green Acres Funeral Home followed by the funeral service at 2:30 p.m. Entombment will be held in Holy Angel Mausoleum. GREEN ACRES Funeral Home and Cemetery 1 Green Acres Lane, Springfield (204) 222-3241 Hwy #1 East inside the Perimeter at Winnipeg Condolences may be sent to: www.greenacresmemorial.com