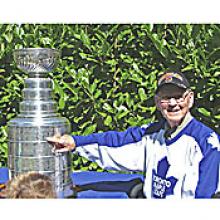 HAROLD (HARRY) TAYLOR Peacefully, on November 16, 2009, at the age of 83. He is survived by Irene, his loving wife of 60 years; his daughter, Kathleen (Bernard); two sons, Ian (Rosemary) and Randy (Vivian); six grandchildren, James, Kristine, Michael, Bradley, Kyle and Ashley and two great-grandsons, Riley and Leeam. Harry began his hockey career by winning the Memorial Cup in 1945 - 1946. He turned professional after that, winning the Stanley Cup in 1948 - 1949 with the Toronto Maple Leafs and won the Calder Cup in 1950 - 1951 with the Cleveland Barons. He retired from TransCanada PipeLines in 1984, and moved to Sidney, BC with Irene in 1989. Private cremation has taken place. A gathering of family and friends will take place at a later date. Condolences may be offered to the family at www.mccallbros.com In lieu of flowers, donations may be made to the Heart and Stroke Foundation.