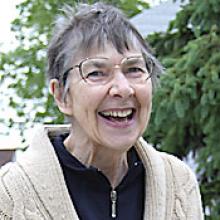 DR. MIRIAM FREDA HUTTON (nee BENNETT) Peacefully, and surrounded by the love of her family, Dr. Miriam Freda Hutton passed away Friday, December 18, 2009 at the age of 77 years. Predeceased by her sister Lorna; her parents, May and Fred Bennett; and daughter Jocelyn, she leaves behind her brother Dave Bennett and his wife Mary-Jane; son John Hutton, daughter-in-law Linda Beaupre; and grand-children, Andrea, Kelsey, Sean. She is also fondly remembered by her foster son Ed Zeglen, his wife Lynn and their two children, Michael and Adam ( AJ); numerous god-children, her former husband Bill and a large extended family. Born in Toronto, in 1932, to missionary parents, Miriam travelled to Bolivia when she was a few weeks old and spent her first few years living on the shore of Lake Titicaca. Returning to Canada in 1935, Miriam's family resettled in Southern Ontario. Miriam received her first degree, in home economics from Guelph University and went on to earn a Master of Social Work degree from the University of Toronto in 1959. She would later return to the University of Toronto to obtain a Doctorate in Education, in the 1970s. In 1962, Miriam and her husband Bill moved to Winnipeg with two small children. When the children had both started school, she went to work first as a social worker with the Family Bureau, and was hired in 1967 as a professor of Social Work at the University of Manitoba where she taught until 1991. She capped off her career by spending three years as Head of the Social Work Department at the University of Botswana, in Africa, returning to Canada in 1994. In addition to her family and her work, church life was very important to her. Raised as a Baptist, she joined the Anglican Church when she married and was active in church committees locally, as well as nationally until her health began to decline. She was a long-time member at St. Matthew's Anglican Church where her life will be celebrated. In 1980, Miriam and Bill lost their daughter Jocelyn to cancer. Jocelyn died at the family home and following her death, Miriam and Bill founded Jocelyn House Hospice in their former home. In additional to being a memorial to a beloved daughter, the creation of Jocelyn House illustrates the generosity and caring for others that distinguished Miriam during her lifetime. Over the years, Miriam drew support from many close friends who helped her deal with the loss of Jocelyn, and the breakup of her marriage in 1984. This community of friends was very important to her, as were the relationships she had with her colleagues and with her students. To everyone who was touched by Miriam in her lifetime, know that she was touched in return and appreciated each one of you. A passionate Christian, an intellectual, an educator, a loving mother and friend, Miriam had many sides. She was also very artistic and spent much of her retirement sewing quilts and wall hangings, which now adorn the homes of many friends and family members. Towards the end of her life, dementia took away many of her abilities but she always remained kind and concerned for others. A memorial service to celebrate the life of Miriam will be held after Christmas at St. Matthew's Anglican Church, at the corner of St. Matthews and Maryland, on Tuesday, December 29 at 2:00 p.m. In lieu of flowers, donations can be made to Jocelyn House or the Primate's World Relief and Development Fund. The family wishes to thank Home Care staff for the support provided while Miriam remained in the community and the staff at Maples Personal Care Home for their compassionate care during this last year of her life.