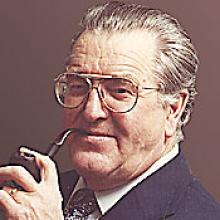 DR. JOHN (JACK) A. MCPHEDRAN November 26, 1924 - February 26, 2010 Born in Stonewall, MB, dad was a real character! His mischievous ways, interest in animals and love of family and friends were his life's passions. Dad and Poppa will be lovingly missed by daughters Marilou, grandsons Jonathan and David McPhedran Waitzer, Betty Ann (Don Rocan), Edith Mae, granddaughters Chelsey and Alexandra McPhedran. Survived by his sisters Elizabeth J. Turner (John A.) of Sacramento, CA, and Donna Cowan Eggertson of Toronto, Dad was predeceased by his wife of 62 years, Mabel, his father Franklin McPhedran, mother Lillian Bertha (Brinkworth) McPhedran Vipond and brother Gordon. A volunteer in the Royal Canadian Air Force during the Second World War, dad went AWOL to marry his high school sweetheart, Mabel Slatcher, prior to deployment overseas. On his return, with Mabel working to support them, dad attained his Doctor of Veterinary Medicine at the Ontario Veterinary College in Guelph. Choosing Neepawa, MB to establish their veterinary clinic, dad and mom raised three daughters, obtained their private pilot licenses and began their life-long support of the Air Cadet League of Canada. Dad - known to many as the flying vet - landed in farmers' fields, flew his family coast-to-coast, enjoyed remote Northern fishing and hunting trips with friends, attended Air Cadet activities and founded the Neepawa Aerial Spray Charter Company. Dad and mom supported the Air Cadets through bursaries and hosting barbecue parties for exchange students at their home on the Red River, replete with delicious food and hilarious attempts at water-skiing! In 1969 dad's dream to improve veterinary services in rural Manitoba was realized when he became Director of Veterinary Services for Manitoba. Moving his family to St. Norbert, MB, he dedicated his professional career to the construction of the Agricultural Services Complex and new Vet Lab, the development of a provincial Drug Distribution Centre and a Semen Purchasing Distribution Centre. Dad also implemented amendments to the Animal Diseases Act, created a veterinary summer student program and established provincial Veterinary Service Districts with 32 Veterinary Hospitals. The University of Saskatchewan recognized these innovations of the veterinary visionary with an honorary doctorate in 1993. In 1989, dad and mom happily retired to Qualicum Beach, BC. They spent many years enjoying their ocean view, golfing and partying with friends, travelling in their motorhome and hosting family visits. Dad passed away in his daughter Edith's arms on February 26 on what would have been his 66th wedding anniversary. His favourite popcorn, peanut brittle, cashews, Scotch and a beautiful red rose for Mom accompanied him! Dad has requested that charitable donations be made in his memory to: The Jack and Mabel McPhedran Memorial Bursary Fund - Air Cadet League of Canada (Manitoba), PO Box 1011, Winnipeg, MB, R3C 2W2. The McPhedran family thanks the care givers at the Gardens in Qualicum Beach for their compassionate care to Dad. We are especially grateful to Judith Churcher for her dedicated advocacy, nourishing home-made soups, wonderful sense of humour and loving support of our father. For more information, please visit Jack's memorial website: http://jackmcphedran.wordpress.com