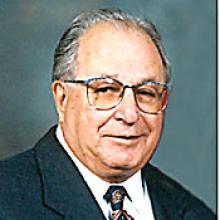 CANON JOSEPH HADDAD, Q.C. It is with great sadness that the family announces the passing of Joseph Haddad on March 21, 2010. Joseph was born to Abraham and Annie Haddad on November 19, 1917 at Amaranth, Manitoba, where he spent most of his youth. After he attended high school, he entered United College (now University of Winnipeg) where he obtained his B.A. degree in 1940. He then spent four years at the Manitoba Law School, graduating in 1944 with L.L.B. and was subsequently called to the Manitoba Bar. In December 1944, Joseph came to Brandon and joined the Law firm of Kerr, McQuarrie and Meighen which later became and still exists as Meighen Haddad and Company, where he practiced law until retiring in 1987. During his practice, he was very active in community work and was also active in the Manitoba Bar Association and the Canadian Bar Association. He was past President of both the Manitoba Bar Association and the Western Manitoba Bar Association; he served time as a Bencher of the Law Society of Manitoba. He was appointed a Queens Counsel in 1963. During his practice he also did legal aid work. In his younger days he also served on the Boards and as President of a number of organizations such as the Children's Aid Society of Manitoba, the Lion's Club of Brandon, the Canadian Arthritis Rheumatism Society (now The Arthritis Society) and others. In 1944, Joseph married Katie Beatrice Ambrose and they had two children - Kathryn Ann and David Joel. He was predeceased by his wife Katie in 1987 and subsequently married Thelma Skeoch. Joseph was also predeceased by his parents, two brothers George and Edward and two sisters Georgette and Josephine. He is survived by his loving wife Thelma, his daughter Kathryn (Dustin) of Burnaby, BC, his son David (Karen) and their children of Qualicum Beach, BC, brother John in Carberry and his sister Evelyn Joyce (Mona) in Nanaimo, BC, two stepdaughters, Cindy Cruise of Winnipeg and Cathy (Jurgen) Figura and their children of Aldergrove, BC and son-in-law, Alan Cruise of Brandon. During his lifetime, Joseph was a devoted member and supporter of St. Matthew's Cathedral having been such for approximately 55 years and during which time served a number of times on the Vestry. In 1967, Joseph was appointed Chancellor of the Diocese of Brandon by the late Bishop Norris and served in this role for a period of 26 years. During this period, the late Bishop John Conlin made him an honorary Lay Canon of St. Matthew's Cathedral. Fraternally, Joseph was a Master Mason and belonged to all the Scottish Rite Lodges. He was also a Shriner and past President of the Brandon and District Shrine Club. During his younger days, Joseph loved the outdoors including fishing and hunting and his favourite sport was baseball, but most of all he loved gardening and making pickles and baking shortbread. Joseph also loved to travel, particularly in Canada and the United States. The Funeral Service will be held at St. Matthew's Cathedral at 403-13th Street, Brandon, on Friday, March 26, 2010 at 2:00 p.m. with The Rt. Rev. Jim Njegovan and The Very Rev. Robin Walker officiating. Interment will follow in the family plot at Rosewood Memorial Gardens. Flowers are gratefully declined. If friends so desire, a memorial tribute may be made to the Arthritis Society, Suite 105-386 Broadway, Winnipeg, MB, R3C 3R6, Canadian Diabetes Association, 727B - 10th Street, Brandon, MB R7A 4G7 or a charity of their choice. Messages of condolence may be placed at www.brockiedonovan.com. Arrangements are in care of Brockie Donovan Funeral Cremation Services, Brandon, (204) 727-0694.