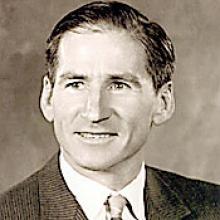 WILLIAM GORDON KONANTZ 1925 - 2010 It is with deep sorrow that we announce the death of William Gordon Konantz on April 6, 2010 after a lengthy battle with Alzheimer's disease. William (Bill) was predeceased by his parents, Gordon and Margaret Konantz and sister, Barbara Maclean Forcey. He will be fondly remembered by his wife of 26 years, Nora Konantz; his former wife, Mary Konantz, the mother of his three children, Patricia Konantz, Martha Peever, and Laura Konantz (David Berry); his brother Gordon Konantz (Gail); and his granddaughters, Clara and Monica Peever. He will also be missed by his nieces, Sandi Maclean Doherty; Leslie Landell (Cam) and Erin Anderson (Sean); nephews Gordon and Douglas Maclean (Mary-Beth Laviolette); Donald Konantz (Catherine); and many great nieces and nephews. Bill was born in Winnipeg on May 9, 1925 and resided in the city all of his life, except during his years of service in the Royal Canadian Navy from 1942 to 1945. The war years were exciting ones for Bill and he had many tales to share about his life at sea. Bill graduated from the University of Manitoba and earned his professional designation as a Chartered Accountant, articling with the accounting firm of Clarkson Gordon. Bill joined the family business of North American Lumber as a third generation family member in 1951. He took on the role of General Manager in 1954, following the death of his father, and served as President of the company from 1962 until 2005. With his sharp mind and legendary attention to detail, Bill was a well respected lumberman and an astute businessman. Bill loved his cottage on Coney Island at Lake of the Woods, Ontario. He was an accomplished sailor, winning his first major regatta at the Royal Lake of the Woods Yacht Club in 1948. Bill served as Commodore of the Royal Lake of the Woods Yacht Club in 1959. Bill represented the Royal Lake of the Woods Yacht Club at the District, Canadian and North American Lightning Championships on many occasions. He loved his garden and enjoyed starting his plants in his greenhouse every spring. He and Nora spent countless hours in the garden or out enjoying nature with their wire-haired terrier Holly. Bill was an avid naturalist, a bird watcher and supporter of waterfowl preservation groups such as Ducks Unlimited, Delta Waterfowl and Fort Whyte Centre. He enjoyed his weekends in the fall duck hunting with friends. Bill had a competitive spirit and was involved in many sports. He enjoyed golfing, downhill and cross-country skiing, curling and was proud to be presented an award for an 8-ender. He was a member of the Winnipeg Winter Club and the Reh-Fit Centre, keeping up his lifelong commitment to physical fitness. He was always a loyal opera fan, a season ticket holder to the Manitoba Opera, and never missed CBC's Saturday Afternoon at the Opera . He was an ardent reader, especially enjoying books about business, biography, and Canadian history. Early in his life, he earned his pilot's licence and flew his own plane. The Konantz family wishes to thank the terrific staff of T3 at the Deer Lodge Centre for their kind and compassionate care. We are forever grateful to them for everything they have done for Bill and all of us. A celebration of Bill's life will be held at Thomson Funeral Home, 669 Broadway, on Monday, April 12, 2010 at 4:00 p.m. In lieu of flowers, donations will be kindly accepted by the Alzheimer Society of Manitoba, the Deer Lodge Foundation, the Margaret McTavish Konantz Memorial Fund at the Winnipeg Foundation. THOMSON FUNERAL HOME 669 BROADWAY, WINNIPEG, MB R3C OX4 783-7211 Condolences may be sent to www.thomsonfuneralchapel.com