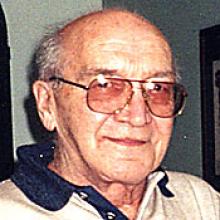 JOHN BACHYNSKY John Bachynsky, 85, of Petersfield, MB, passed away peacefully on Saturday, April 10, 2010 at Selkirk and District Hospital. John was predeceased by his wife Doris in 2005 and his stepson Edward (Ted) George in 2009. He will be lovingly remembered by his stepchildren, Carol Lee (Jack), David George (Monica), Susan George (Larry), Linda O'Dell (Clint), Doug George and their children and grandchildren. He is also survived by his sister Jaroslava (Slava), her two sons, Nicholas and Michael and her daughter Sandra. John was born and raised in Winnipeg. As a young man he served in the Armed Forces. After returning from overseas he worked with his father in Poplarfield, MB on the family farm. He later worked for the Manitoba Government in The Pas on the survey crews, trap lines on Lake Manitoba and prior to retirement he was self employed as a carpenter. John and Doris retired to Petersfield, where they loved tending the vegetable and rose gardens and bird feeders. Special thanks to our brother Doug whose constant companionship and care over the past several years allowed John to stay in his own home. Cremation has taken place and a memorial service will be held by the family at a later date. In lieu of flowers, donations may be made to a charity of your choice. CROPO FUNERAL CHAPEL 586-8044