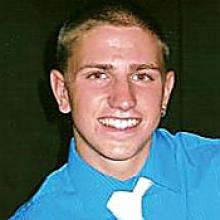 KELLY DREW CLAY May 1991 - April 2010 It is with great sadness and many wonderful memories that we announce the tragic passing of Kelly on April 15, 2010 at 18 years of age. Kelly was a loving and happy go lucky young man, with a beautiful smile that lit up the room. He was the youngest of four boys. As a youngster he could be seen around the arenas with his little hockey stick and puck while attending his older brothers hockey games. He became an excellent athlete starting to play hockey and soccer at the age of four. Later on came football and his biggest passion, Lacrosse. He was named to the All-Star team at a tournament in Vale, Colorado and was also named most valuable player of the tournament. Kelly was currently attending West Kildonan Collegiate with plans to attend Red River College. Left to lovingly remember him are his parents Bob and Karen, brothers Kyle (Mindy), Cory, Cody (Kelly) as well as his nephews Carter and Brenon. Kelly was looking forward to the birth of his niece at the end of May. Also left to mourn his passing are his grandmothers Shirley Clay and Penny Kasper as well as many aunts, uncles, cousins and friends. The family extends sincere thanks to the Staff at the Health Sciences Centre and the Winnipeg Police Service. A Celebration of His Life will be held on Thursday, April 22, 2010 at 6:00 p.m. in the West Kildonan Memorial Community Centre Arena, 346 Perth Ave. and Powers Street. Viewing will be held one hour prior to the service. Interment will be held at a later date. In lieu of flowers, please make donations to a charity of your choice. 1839 Inkster Blvd. 275-5555