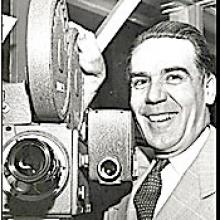 KEN DAVEY Peacefully, on May 7, 2010, in Victoria, BC, Kenneth Richard Davey, CSC, 94, passed away to join his wife, Violet, whom he loved and adored. Ken leaves behind his daughter, Susan Davey (Ed East), granddaughters Jane Gagne (Mike Gagne), Emily Gingera and great-grandson Christian Kenneth Marc Gagne. Ken's pride and joy came in the form of his family. He was a loving and caring husband, father and grandfather and he devoted his entire life to them. Ken attended St. John's High School in Winnipeg and excelled as an amateur athlete winning provincial awards in barrel jumping, speed skating and ski jumping. Ken also excelled in academics and while his interests were in the medical profession, financial hardship prevented him from going on to university. Ken began his career in the photographic department of the Hudson's Bay Company where he discovered a love for film, eventually becoming a lifetime member of the Canadian Society of Cinematographers. He went on to open his own very successful film and advertising businesses. Ken was a very resourceful man, self-taught in the film industry he constructed his own processing lab, allowing him to provide the quick turn around times from filming to tape, coveted by the television industry. He undertook contract work for CBC-TV and CJAY-TV in Winnipeg and CKND in North Dakota, filming events and processing film. Ken had a passion for sports and he is most proud of the time he spent associated with the Winnipeg Blue Bombers. He was asked by the Winnipeg Blue Bombers to shoot footage of their games for coaching purposes. He went on to film the 1935 Grey Cup in Hamilton and every Winnipeg football game that followed for 35 years (except for the war years). He has been acclaimed as an important figure in the evolution of Canadian football and was inducted into the Winnipeg Football Club Hall of Fame in 2001. He was also the first to devise a method for shooting night football games and the first to film the Macdonald Briar held in Winnipeg in 1940. For the briar he used a filming method that negated the need for heat producing lighting which previously prevented filming of curling events. Ken took a chance and convinced the CBC to film the 1967 Pan Am Games in colour which he then processed to perfection. Ken was also an accomplished artist and ran a successful silk screening business. He retired in the 70s and became a skilled curler and golfer and could be found spending many hours at the St. Charles Golf and Country Club and the Granite Curling Club. Ken moved with his family to Sidney, BC, in 2007, where he spent his remaining years. He will be lovingly remembered as a creative, brilliant and amazing man who valued kindness and generosity above all. He was a man who always accomplished what he set out to do. He will be greatly missed. At his request there will be no funeral/memorial service. Ken will be laid to rest in Winnipeg at the St. James Cemetery alongside his wife, Violet.