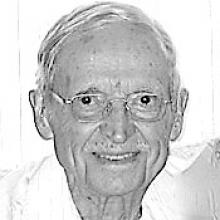 GEORGE CLIFFORD GREEN George Clifford Green passed away peacefully in his home on the morning of June 8, 2010. He was predeceased in 2005 by his wife of 58 years, Thelma. He is survived by his children Linda Dart, Bruce Green (Shirley), Richard Green, his grandchildren Allison Dart (Brent), Jonathan Dart, Erin Green (Shane), his great-grandsons Brody, Luke, and his sister Eunice Emerson. He was predeceased by his siblings Arthur Green, Colin Green, Frank Green, Clara Peterson, and Allan Evans. Cliff was born in 1914 in Giroux, Manitoba to Nellie Maude and James Edward Green. He lived in Giroux until he moved into Winnipeg to attend first Earl Grey School and then Kelvin High School. He served overseas with the Royal Winnipeg Rifles in the Second World War, and worked as a roofing salesman at Domtar Construction for over 40 years. Cliff married Thelma Nass on October 4, 1946. They lived first in Edmonton, then later in Winnipeg, as original residents of Niakwa Park on Cherokee Bay. They were also founding members of Windsor Park United Church. Thelma and Cliff enjoyed travelling, gardening, playing cards and spending time with friends and family. Cliff especially loved golf and curling. In their golden years Cliff and Thelma moved into The Waverley where Cliff remained for 11 years. Cliff made many friends there including his best friend Ralph Moss who was the chief organizer of the bridge games which kept his mind sharp and gave him much enjoyment. Cliff was a quiet, kind and gentle man who loved his family very much. His presence at Sunday dinners will be much missed. The family would like to thank Dr. Aaron Mellon, Dr. John Rabson, Andrea Vinci Physiotherapy, the staff of the Waverley and Home Care for the excellent care they provided. A celebration of Cliff's life will be held at Windsor Park United Church at 11:00 a.m. on Saturday, June 12. In lieu of flowers, donations to the Heart and Stroke Foundation or Windsor Park United Church would be appreciated.