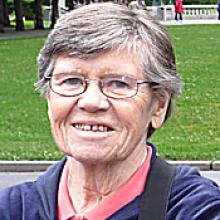 THELMA JULIET HJALMARSON 1930 - 2010 It is with great sorrow that we announce the passing of our mother Thelma Hjalmarson on June 12, 2010. Mom spent her whole life caring for others, and her family had the great privilege of caring for her on her final journey. Mom was born in Woodlands, Manitoba on July 18, 1930, and enjoyed a happy childhood as the youngest of a large family. She wanted to be a nurse, and moved first to Stonewall to complete high school and then Winnipeg to the Grace Hospital to fulfill that dream. Along the way she married her childhood sweetheart, John, and together they raised their four daughters, pursued their dreams, and always encouraged us to pursue ours. She was predeceased by dad, John Hjalmarson, and her parents Olaf and Martha Sund, as well as sisters Hilma, Margot, and Alice Sund, and brother Kari Solvason, brothers-in-law Leo and Armann Hjalmarson, and John Broadfoot, sisters-in-law Grace Hjalmarson and Marie Solvason, and nephews Donnie and Doug Solvason, and Vincent and Jim Broadfoot. She is lovingly remembered by daughters Robyn (Warren Olson), Janis (Brent Campbell), Susan and Lisa, grandchildren Matthew and Kathryn Olson, Stefan, Kristyn and Erik Campbell, and Dana, Alex and Brianna Gregovski, and lifelong special friends Edith Steinthorsson and Nina Broadfoot, as well as sisters Florence Burke and Helen Larsson, brothers Palmer (Jean) and Armann Solvason, and many beloved nieces and nephews. Thelma spent 28 years in Thompson, where she and John raised their four daughters. Mom worked most of that time at the Thompson General Hospital as the head nurse in the O.R., where she was well respected by the medical and nursing staff. Her daughters Lisa and Jan both had the privilege of following in her footsteps. Some of her fondest memories of the years in Thompson came from time spent at the cabin at Paint Lake with family and friends. After retirement, Thelma relocated to Stonewall, where she spent many happy years with family and best friends Edith, Nina and Grace. Her greatest pride and joy were her grandchildren. Many thanks to Auntie Edith for enabling Mom to stay in her home, and to both Auntie Edith and Auntie Nina for keeping her out gallivanting , and living her life to the fullest. We would also like to thank Doctors Michele Evans and Brian Sharkey, and Dr. Ian Maxwell and the staff at the Victoria Hospital Oncology Unit, and Dr. Liu and the staff of the CCM Radiation Oncology Unit. Funeral services will be held on Friday, June 18, 2010, 2:00 p.m., at Neil Bardal Inc., 3030 Notre Dame. In lieu of flowers, donations if desired would be gratefully appreciated by CancerCare Manitoba NEIL BARDAL INC. (204) 949-2200 nbardal.mb.ca