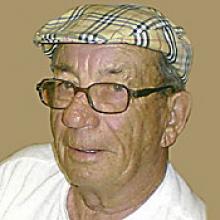 ALBERT MERVIN MCKAY 1931 - 2010 Albert Mervin McKay of Ashern, Manitoba passed away at the Red Deer Regional Hospital Centre on Thursday, June 24, 2010 at the age of 79 years. Mervin was raised in Ashern where he farmed and discovered his true passion for raising horses. He always had a great sense of humor and Mervin was always happy and fun to be around. Mervin is survived by his five sons, Mark Dean (Kim) McKay of Ottawa, ON, Rusty Owen (Yvette) McKay of Calgary, AB, Colin Graham McKay of Red Deer, Darrell Edward (Rosemary) McKay of Chapaul, QC and Carey Robin McKay of Ottawa, ON, eight grandchildren, Mathew and Melissa, Tyler and Ryan, Sarah, Josh, Nicolas and Victoria and two great grandchildren, Aaven and Maxwell. He is also survived by his brother Dennis and his two sisters, Phyllis and Garneeta. Mervin was predeceased by his parents, Colin Sr. and Elizabeth Ivy McKay. P.S. Thank's for the smile, Dad . You will be especially missed by your friends in Ashern. A memorial service will be held at 2:00 p.m. on Wednesday, June 30, 2010 at the Arnason Funeral Home, 28 - 1st Ave N., Ashern, MB with Pastor Bill Watson officiating. Interment will follow at a later date. If desired, donations in Mervin's memory may be made to the Heart Stroke Foundation of Manitoba, 6 Donald St., Suite 200, Winnipeg, MB R3L 0K6. Arrangements by: ARNASON FUNERAL HOME Ashern - Lundar 1-204-768-2072 1-866-323-3593