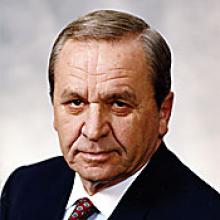 HARRY J. ENNS November 30, 1931 - June 24, 2010 With heavy hearts we announce the death of our husband, father, opa, brother and dear friend. When Harry's great heart was too tired to carry on he returned to his Maker and was reunited with the beloved son John David (Chewky) born to himself and first wife Helene (nee Klassen), his parents Rev. J. Enns and Agathe Enns, his brother Ernest, sister Marlies and her husband Horst Friesen and brother-in-law Dr. Peter Enns. He leaves to mourn his passing his wife Eleanor (nee Jones), his sons Nathan (Kate Wells), Andrew (Lori Mitchell), Curtis and his daughter, Allison (Sean Bednarek); grandchildren Matthew, Sara, Peyton, Cohen and Harlow; Brothers Sig (Vera), John (Martha), Henri (Marie); sister Selma and sister-in-law Irene. In addition, the nieces and nephews many of who spent summers and holidays with their colourful Uncle Harry at the ranch in Woodlands, MB. Harry was born in Winnipeg while his parents were still living in St. Elizabeth, MB but soon his family moved to Winnipeg when his father became a minister for the First Mennonite Church. Harry and his brother John were among the first hippies backpacking around Europe shortly after the Second World War. He loved to travel and saw much of the world but he always yearned for the ranch where he was the happiest. In 1966 he became the MLA for Rockwood-Iberville (Lakeside) after some encouragement from his brother Sig who was the Member of Parliament for Portage-Neepawa at the time. Harry was very proud to represent his constituents in the Manitoba Legislature, serving under four premiers in several portfolios. He served the people of Manitoba for 37 years. He was a lifetime member of the Progressive Conservative Party. Harry loved to sing and in his younger years appeared on Rainbow Stage in such productions as Gentlemen Prefer Blondes. He sang with his family in concerts at the Muriel Richardson Auditorium raising money for many charities. He sang for his constituents at weddings, anniversaries and funerals. He sang as he fed cattle, cut hay, baled hay. He loved to sing and we loved to listen. Harry often went fishing with his dear friend Cubby Barrett. Harry may or may not have picked up a rod but he enjoyed the outdoors. This group of friends canoed the Nelson River to York Factory and later the Seal River to Hudson Bay. A memorial service will take place on Wednesday, June 30, at First Mennonite Church, 922 Notre Dame Avenue, at 11:30 a.m. Harry will be interned at Brookside Cemetery alongside his son John David (Chewky). Husband, Father, Opa, Friend we miss you terribly and we will cherish your memory and always Denk Wer Du Bist. In lieu of flowers a donation to the Heart and Stroke Foundation or a charity of your choice is preferred. NEIL BARDAL INC. (204) 949 - 2200 nbardal.mb.ca