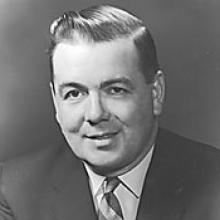 JOHN EDWARD HEENEY John Edward Heeney passed away peacefully at Deer Lodge Centre on July 12, 2010 in his 94th year. Predeceased by his wife of 33 years Marion Helen Lorraine Heeney (nee Burnett) (1979) and predeceased by his wife of 28 years Norma Price Heeney (nee Killeen) (2008). Dearly loved by children Jacquelyn Heeney, Nestleton, ON Jocelyn Heeney, Nestleton, ON, Linda Lev, Winnipeg, Randy Price (Marie), Vancouver, and Donna Price, Vancouver. His five grandchildren and six great-grandchildren will always remember him. Remembering him also is a dear friend Dona Brekelmans. John was born in Toronto in 1916 and was a graduate of Del La Salle College. Prior to seeing active service overseas in the Second World War he spent many years in the hospitality industry. When he returned home to Canada, he joined Carling Breweries as a Sales Representative, John's career in the brewing Industry spanned several decades which saw him moving across Canada from Toronto to Windsor, Ottawa, Montreal and finally Winnipeg where John was appointed Vice President of Sales for Western Canada for Canadian Breweries. Retiring in 1981 John continued to make Winnipeg home, spending his time gardening, golfing and devoting his time to many charitable organizations, and dividing his time between, Toronto, Vancouver, California and Winnipeg. Funeral Mass will be celebrated by Monsignor D. Ward Jamieson at the St. John Brebeuf Roman Catholic Church, 1707 John Brebeuf Place in River Heights on Monday, July 19 at 11:00 a.m. A private family interment will be held at the Queen of Heaven Mausoleum, Assumption Cemetery. LECLAIRE BROTHERS in care of arrangements 775-2220