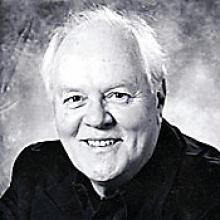 DR. H. DAVID HEMPHILL September 4th is the 1st year anniversary of the passing of Dr. H. David Hemphill. He was a father of four: Carol, Jim, Ross and Susan; grandfather of six: Candice and Zachary Hemphill, Scott and Caitlin Fredericks, and Tabitha and Luke Hemphill; brother to Barbara MacKinnon and Pat Zondag; and son of Davey and Louie. David grew up on Dunbar St. in Vancouver and excelled at both academics and athletics. He followed his love of tennis to play on the University of British Columbia tennis team. There he became student body president, met his future best man Jim Killeen and earned Bachelor and Masters degrees in Education. During his time at UBC, he met, fell in love and married Maureen. They, together with their four kids, moved to Edmonton where David completed his thesis and received a PhD in Educational Administration. From there the family moved to Winnipeg where David worked at the Manitoba Department of Education. He did some ground breaking work before being hired as the Managing Director of the then Museum of Man and Nature (now Manitoba Museum) where he spent ten years. But he definitely wasn't all work and no play; David loved his Friday afternoons at the Jimmie (St. James Hotel) tipping back a few with his best buddies, Mike Yakimishyn, Tony Riffle and Jack Peach. He also loved watching tennis, singing in a choir and being the king of trivia and Jeopardy. Through it all the West Coast kept calling him back and finally in the mid 80's he returned with his new wife Martha Cooke, initially living in Vancouver, then finally settling in Victoria. David was a strong family man and possessed a great sense of humour. He loved life and had an infectious personality that drew people in. David was blessed with a loving family and great friends. Truly a life well lived.