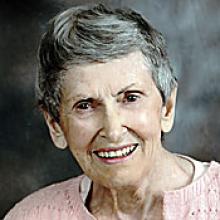 JANE ELIZABETH MONTGOMERY July 21, 1916 - September 25, 2010 Jane left our midst last Saturday quite unexpectedly. After a brief stay at St. Boniface Hospital following a fall at home, she was recovering quite well, and almost ready to go back home. The eldest daughter of Edward William Montgomery and Mary Susannah Bell, Jane was predeceased by her parents, her brothers, Edward and Billie, and her step-sisters Mary and Edna. Jane spent many happy summers as a child in the family's country home Green Gates on the Red River in East St. Paul. She attended Earl Grey School, Gordon Bell School and then went to Angus Business College which led to a brief career as a medical secretary with the Children's Hospital Pathologist. After a bout of cancer, she was not able to work, and had to sell the family home on Nassau Street. She moved away for a time with her younger brother Billie. On her return, she became involved with the Boy Scouts, one of her many volunteer activities which continued until just a few years ago. She sang in the choir at Crescent Fort Rouge United Church for many years and became the official greeter at the front door every Sunday. It was nearly impossible to pass by her without getting a hug. She loved to meet new people and to have a weekly update with everyone; never forgetting anyone in the process. Her scheduled phone calls, birthday cards (We all got one every year. What will we do now?), regular outings to concerts, symphonies, lunches and more, would wear out a person half her age. She was an inspiration to us all. We will miss her. A memorial service will take place on Sunday, October 24, at Crescent Fort Rouge United Church, 525 Wardlaw Avenue, at 2:00 p.m. Donations, if friends so desire, may be made in Jane's memory to Crescent Fort Rouge Untied Church, 525 Wardlaw Avenue, Winnipeg, MB R3L 0L9 or the Canadian Cancer Society, Manitoba Division, 193 Sherbrook Street, Winnipeg, MB R3C 2B7. NEIL BARDAL INC. FUNERAL CENTRE (204) 949-2200 nbardal.mb.ca