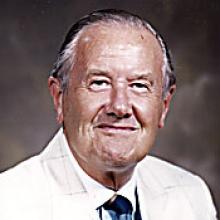 JOHN (JACK) MATHESON 1924 - 2011 It is with a profound sense of sadness that we announce the passing of John (Jack) Matheson of kidney disease at 86 years of age, which means that Matty is now in search of a press box up in heaven. He passed away peacefully on January 24, 2011, with his family at his side at Grace Hospital. A wonderful husband, a loving father and grandfather and a giant in the Canadian newspaper industry. He is forever loved by Peg, his LGIW (luckiest girl in the world) and wife of 63 years. He is also survived and loved by his sons, Jim (Marni), John; and daughter Marnie (Cam) McCullough; his cherished four grandchildren, Scott, Keith, Megan and Danny; his sister Alice (Babington) of Ajax, Ontario; and sister-in-law Nancy (Kent) of Vancouver. He was born John Matheson on July 25, 1924 in Winnipeg but he was always Jack to his family or Matty to his friends and newspaper followers. He went to Gordon Bell High School, then into the navy in the Second World War. While in the navy and home on leave, he met the lovely Peg on a train on its way to a dance at Grand Beach. Jack never did learn how to jive or waltz, but he still managed to sweep Peg off her feet. More with his wit than his feet although he always loved a good song, especially Frank Sinatra and Peggy Lee, and once he played the cymbals with orchestra leader Mitch Miller for a story. Jack and Peg were married in 1947 and after an attempt at a 9-to-5 office job to pay the bills, Jack brazenly went down to the Winnipeg Tribune to see if they needed a sportswriter. Vince Leah told the young man to write a story and Jack never stopped pounding away on his typewriter until the Tribune folded in 1980. His family was his true love and his writing was his passion, even after he changed gears and went to work full-time at CJOB radio, where he was already well-known for his Furnasman Fires Up Jack Matheson commentaries. Give Matty a piece of paper and a deadline and he could craft a story, often biting, always interesting. He covered the Blue Bombers of Kenny Ploen, Leo Lewis and Frank Rigney and, of course, the legendary coach Bud Grant. When the football games ended, he spent his winters around curling rinks, telling tales of Don Duguid, Orest Meleschuk and Ray Turnbull. There was always a Grey Cup or a Brier or a world curling championship to write about, usually in the company of his great friend Jack Wells, and nobody did it better and longer than Matty, always with Peg at his side. Jack received a number of tributes during his career, including induction into the Canadian Football Hall of Fame, Canadian Curling Hall of Fame, Manitoba Hockey Hall of Fame, Manitoba Basketball Hall of Fame and the Canadian Sportswriters Hall of Fame. He also received the prestigious CFL Commissioner's Award for meritorious service in 1991 and won the Scotty Harper Memorial award for the best national curling story four times. In 2002, Jack was honoured that the Manitoba Sportscasters and Sportswriters Association created the Jack Matheson Award', given annually to students pursuing a career in sports communications. He was also proud that his three children and one grandson found their way into either the writing or communications fields. The family would like to thank the doctors, nurses and aides at Grace Hospital who looked after Dad during his last three months. Special thanks to Dr. George, Val and Maria who were so kind on his final weekend. A private service will be held in celebration of Jack's life. In lieu of flowers, give a hug to someone you dearly love. - 30 - For those who wish to sign the online Guest Book, please visit our website at www.chapellawn.mb.ca Chapel Lawn 885-9715