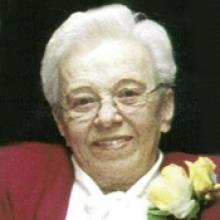 VERA ENNS Vera Enns (nee Loewen) died peacefully at Misericordia Health Centre on January 28, 2010. She was born December 10, 1926 in Winkler, MB and moved to Winnipeg with her family in 1932. She attended the Bornof School of Music and graduated from the Daniel McIntryre Collegiate Institute and Success Business College. Vera married her husband Sig Enns in 1949. Vera leaves to mourn her passing, her husband of 61 years, Sig Enns; sons: Carl (Robyn), Kamloops, BC; Chris (Helen); Curtis (Nadine), Guelph, ON; siblings: Bill (Jackie), Vancouver; Walter (Eleanore), Heidi Loewen, Robert (Kerstin), Langley, BC; grandchildren: Mark, Shannon, Erika, Louise, Jean, Andrew and Selma, and many nieces, nephews and friends. She was predeceased by her parents William and Olga Loewen, and daughter Cathryn, for whom she provided loving care after a tragic accident. Her husband's frequent work transfers meant several moves for the family - The Pas, Swan River, Portage la Prairie, Ottawa, St. Francois Xavier, Winnipeg. She had a variety of work experiences: as a teller at the Toronto Dominion Bank, principal secretary at Thompsons Printing Supplies, music teacher, grain truck driver at harvest time on the family farm, assistant manager of the Downs Motor Inn, postmaster for St. Francois Xavier in the family owned Lakeview Country Store. Most notably was her involvement with music. While living in Portage la Prairie she became known as a popular piano teacher and was recruited to start the Portage Indian Residential School Choir. When the family moved to Winnipeg, Vera was hired by the St. James School Division to teach the music program at Sansome Junior High School, and for several years did substitute teaching for various grades in various schools. During the music festivals she was the official accompanist for the school division and assisted in the training of choirs for the festival. In 1970, Vera accepted a two year position as the music teacher at Balmoral Hall, a private school for girls. She was also the accompanist for several concerts of the Enns Family and Friends Singers. In 1989 Vera was the Conservative candidate in the by-election for the federal riding of Selkirk (a vacancy caused by the resignation of Edward Schreyer from the House of Commons). Vera was a member of the First Mennonite Church of Winnipeg where she was baptized in 1947. She was a member of the choir and soloist. She served as a member of the Big Sister Association and the Westgate Ladies Auxiliary Vera was much loved by her family, friends and relatives and they have many fond memories to cherish. They will miss her keen sense of humour and quick wit which she maintained until her passing. Cremation has taken place. A memorial service will be held on Friday, February 4, 2011 at 11:00 a.m., at First Mennonite Church, 922 Notre Dame Avenue. The family wishes to extend a heartfelt thanks to Concordia Hospital (N1) and Misericordia Health Centre (Cornish 6) for the excellent care and warmth they gave Vera.