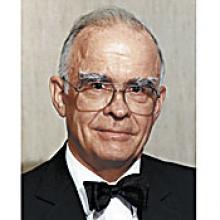 DR. WILLIAM D. BOWMAN William David Bowman was born in Winnipeg to Dr. Maxwell Bowman and Marjorie Bowman on May 24, 1925. He was one of identical twins. His twin passed away on May 22, 2005. Bill died after a long illness on March 2, 2011. Bill is survived by his beloved wife of 61 years (Peggy / Margaret). He is also survived by his six children, Dr. Paul (Lois), Dr. Nancy, Dr. Susan Canham (Bill), Bruce (Lisa), John (Barbara) and Brian. He is also survived by 16 grandchildren and four great-grandchildren, all much loved. Bill and his twin brother, Jack, graduated M.D. from the University of Manitoba in 1949. Bill always took great pride in the eminence that Jack achieved in the field of Rh disease treatment and prevention. Bill took pride also in the fact that three of his children and four of his grandchildren followed him in the study of medicine and became successful physicians. Bill's love of children led to his decision to devote himself to the study and practice of pediatrics. Following a rotating internship in 1948-1949 he spent two years in pediatric residency at the Children's Hospital, Winnipeg, and a third year as a fellow in pathology at the same hospital. In 1952 he was granted a Nuffield travelling fellowship and spent the following two years in the United Kingdom in Newcastle upon Tyne in the pediatric department of Sir James Spence. This was a wonderful educational experience. Bill and Peggy returned to Winnipeg in May of 1954 and Bill joined Dr. Harry Medovy in pediatric practice. Bill passed his Royal College exams and was certified as a specialist in pediatrics. In 1964 he received his fellowship in the Canadian Royal College of Physicians. In 1955 Bill established the department of pediatrics at the Manitoba Clinic where he practiced pediatrics until his retirement in 1998. At the time of his retirement he left a thriving department of 13 pediatricians. Bill was a member of the active medical staff of the Children's Hospital Winnipeg and of the Grace General Hospital. He served for several years as president of the medical staff in both hospitals. Bill was active in pediatric teaching at the University of Manitoba. He retired from the university in 1990 with the rank of Professor. He loved teaching and enjoyed contact with medical students. In 1995 he was the recipient of the Dr. Leighton N. Young Distinguished Pediatrician Award, Department of Pediatrics. Bill was active in the community. He served on the board of Directors of the Manitoba Medical Services Foundation from 1971 until his death. He was a member of the Board of Directors of Manitoba Blue Cross from 1975 to 1999 and was chairman of that board from 1979 to 1986. Bill loved Victoria Beach and spent many happy days at the cottage. Bill had an interest in model railroading for over 50 years. He loved steam engines and had a collection of over 30 HO steam locomotives. They all ran very well on his model industrial switching railroad and he spent many happy hours with his trains. Service at St. Andrews United Church, 255 Oak St., at 4:00 p.m. on Sunday, March 6, Rev. Karen Lumley officiating. In lieu of flowers, donations may be made to the Children's Health Foundation of Manitoba, CE501 840 Sherbrook St., Winnipeg, MB. Bill was very fortunate. He had a long, happy and successful life. He loved and was loved by his dear wife Peggy and his children, grandchildren, and great-grandchildren.