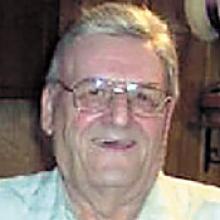 EDWARD JOSEPH DUDECK 1928 - 2011 It is with great sadness we announce the passing of Edward Dudeck on Tuesday, March 15, 2011, at Concordia Hospital, at the age of 82. Left to cherish his memory are his children, Dennis, Sharon (Paul), Bev (Dave), Ronald (Bev), Karen and his six grandchildren, Shannon (Chris), Ian, Jonathan, Nicholas, Allison and Derek. Edward is survived by his sisters and brothers, Mary, Bertha, Leon, Frank and Adeline. He was predeceased by his wife, Violet in 2006, his parents, Thomas and Emilia, and his brothers Walter, Stanley, Michael, Joseph, John, Julian, Alvin, Billy and sister Jean. Edward was born and raised on the family farm in the Garson area. In 1955 he married his wife Violet and started his family. Edward was a carpenter by trade. He started out building houses and then specializing as a cabinet and finishing carpenter. For many years he worked at Paramount Windows with his brothers and extended family until his retirement. Dad will be remembered for all the help he gave to his family through the years and his quick wit made a lasting impression on everyone he met. In his retirement years he enjoyed golfing, travelling and just spending time with friends and family. Funeral service will be held at 11:00 a.m. on Tuesday, March 22 at Holy Redeemer Parish, 264 Donwood Drive. Reception to follow. Private interment to follow at a later date. Arrangements have been entrusted to Cropo Funeral Chapel.