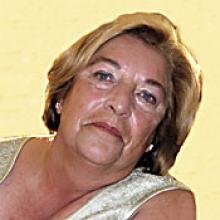 ELEANOR ENNS (formerly BUFFIE) (nee JONES) With heavy hearts we announce the passing of our dear mother, grandmother, auntie, sister and dear friend on March 20, 2011. When Eleanor's beautiful spirit was too tired to carry on she returned to her Maker and was reunited with her beloved first husband Kenneth Alfred Buffie and second husband Harry J. Enns, her parents John Jack Jones and Ida Mary Jones, brothers, Edwin Jones, Evan Butch Jones and sister Dora Gowler. She leaves to mourn her passing her daughter Allison Bryce Buffie (Sean Bednarek), sons Curtis DeMeyer, Andrew Enns (Lori Mitchell), and Nathan Enns (Kate Wells); grandchildren Matthew, Sara, Peyton, Cohen and Harlow; brother Ralph Jones (Shirley), sisters Barbara Moore, Margaret Peggy Blair (Irvin) and Megan Poitras (Roger), sisters-in-law Lynda Jones and Gail Jones, along with many nieces and nephews. Eleanor was born in Winnipeg on November 4, 1945 while her parents were living in Headingley. Her father, who came over from England in 1913 was a farmer. The family later moved to St. Francois Xavier where her father continued to farm and also owned Jones' Café. As a young girl Eleanor worked many hours at the cafe. After their marriage, Eleanor and Ken lived in Winnipeg, later moving to Calgary. Following Ken's death in 1974 she returned to Manitoba. In 1984 she married Harry and moved out to Woodlands. Eleanor wore many hats in her working life. She started her career in Winnipeg as an operating room technician at the then Winnipeg General Hospital. After a move to Calgary with Ken, Eleanor found herself managing the Antique Auction House. When she returned to Manitoba after Ken's death, she graduated as a medical transcriptionist and was employed at the Health Sciences Centre. Through much of the 1980s, Eleanor worked in Manitoba's Legislative Building as an administrative assistant with the Manitoba P.C. Caucus. It was here that she met Harry. After their marriage, Eleanor left the Caucus to manage the Federal Regional Minister's Office in Winnipeg. It was out at the Morning Star Ranch in Woodlands where Eleanor was able to pursue some of her many other interests. She loved to create beautiful pottery which she mostly gave as gifts to her family and friends. Eleanor was an avid gardener who passed the winter months researching what to plant that spring and then successfully seeing the fruits of her research in the shape of massive overflowing flower beds that seemed to bloom continuously from June until September. Eleanor spent many hours exploring her family history which was a passion she shared with her sisters. She entertained family and friends alike with stories of the family ancestry during the many gatherings around the large dining room table or in the screened porch overlooking her gardens. Besides Red Angus cattle (which she referred to as her red ladies') and horses, Eleanor loved to work on what she and Harry called their small animal division , which consisted of an assortment of sheep, goats and alpacas. She often accompanied her grandchildren and young nieces and nephews on walks amongst the small animal division where they would hand feed them all. Wife, Mother, Grandmother Nan , Auntie, Sister, Friend, we miss you so much and we will cherish your memory always. A memorial service will be held at Chapel Lawn Funeral Home, 4000 Portage Avenue, at 10:00 a.m. on Friday, March 25. In lieu of flowers donations, may be made to Diabetes Association or CancerCare. For those who wish to sign the online Guest Book please visit our website. Chapel Lawn www.chapellawn.mb.ca 885-9715