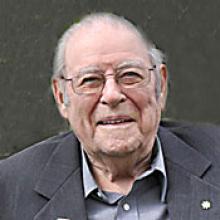 J. E. REESOR BINGEMAN Reesor Bingeman passed away peacefully on March 31, 2011 at the Grace Hospital at the age of 91. He is survived by his wife of 68 years, Norma, and children, Blair (Valerie), Judy (Terry), Craig (Lorraine), Kendall (Deborah), and Patricia (Ken), as well as four grandchildren, Jennifer, Derek (Sarah), Cullen, Kristin (Jaya), and one great-grandson, Esa. He is also survived by his elder sister, Elizabeth (Betsy) Carr and her husband, Jack of Toronto, and his younger sister, Catherine (Kit) Stevenson of West Vancouver. Born in Toronto, Reesor was the only the son of Milton and Frainie Bingeman. In 1920, the Bingeman family moved to Winnipeg and Reesor attended Robert H. Smith and Kelvin Technical High Schools, and at the age of 16, met his sweetheart for the next 75 years, Norma. His university studies at Queens University were interrupted when he enlisted in the Canadian Army in 1940 and received his commission as 2nd Lieutenant. He and Norma were married in 1942, and shortly after, Reesor went overseas as a reinforcement officer for the Winnipeg Rifles and transferred to the mortars of the Saskatoon Light Infantry with the First Division in Sicily. He also saw service with the Lorne Scots in Italy, Germany, Belgium, and Holland. Reesor entered business following the war and was an insurance agent for Great West Life, Commercial Insurance Agencies, Bingeman Insurance Agencies, Armstrong and Taylor, and retired as the Winnipeg Manager of Mercantile Department at Reed, Shaw Stenhouse in 1979. Reesor was a man of high principles, solid integrity, unquestionable honesty, and firm reliability. He was a true gentleman. Following in his father's footsteps, Reesor embraced the Masonic life when he was initiated into The Assiniboine Lodge #114 in 1959. He became Worshipful Master in 1972, and proceeded through various chairs ultimately reaching the position of Grand Master of the Grand Lodge of Manitoba in 1979. He continued as Grand Secretary from 1980 to 1986. During that time, he was very proud to spearhead the Masons Care campaign which provided funds to purchase cars in perpetuity to transport cancer patients in Winnipeg to and from their homes and cancer treatment clinics. He supported the Masons Care program as a driver for 17 years. In recognition of his service, the Masons created the J.E. Reesor Bingeman Medal Cancer Driver Award , which is now presented to drivers with five years or more service. His other fraternal associations echoed his dedication to the craft; he was Grand Master of the Royal Order of Scotland 1985 to 1990, Past Commander-in-Chief of the Scottish Rite, Honorary 33rd Degree of Scottish Rite, Legion of Honour of DeMolay, and the Ritualistic Unit of the Khartum Temple. Reesor was a dedicated Mason; he enjoyed meeting fellow Masons throughout Canada and the States, and had many lifelong friends in the fraternity. Reesor and Norma were members of St. Andrew's River Heights United Church for many years, and he participated on various church committees. In later years, he served on several committees with the Canadian Cancer Society, Manitoba Division. In 1993, he was honoured to receive the Cancer Society's highest award, the Gold Award for Volunteer Services, for the Driver Program. In their leisure time, Reesor and Norma enjoyed attending the Winnipeg Symphony performances and were dedicated Blue Bomber fans for many years. Dad was a loving and proud family man. He loved people, and made friends wherever he went. He had a good sense of humour and with a twinkle in his eye, was always ready with a joke or pun. The Bingeman family spent many happy summers at their cottage at Victoria Beach. The family is so grateful for the exceptional staff at The Wellington and more recently at Tower 6, Deer Lodge, who provided such wonderful care for Dad over the last couple of years. A memorial service will be held on Thursday, April 7, 2011 at 1:00 p.m. at Neil Bardal Funeral Centre, 3030 Notre Dame Avenue (across from Brookside Cemetery). In lieu of flowers, donations can be made to the Canadian Cancer Society, Manitoba Division, 193 Sherbrook Street, Winnipeg, MB R3C 9Z9 in Reesor's memory. Condolences may be sent to www.nbardal.mb.ca NEIL BARDAL INC. FUNERAL CENTRE (204) 949-2200 nbardal.mb.ca