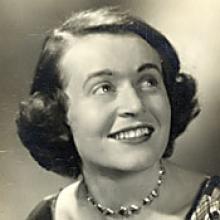 LOUISE ADAMS (nee Bernier) 1925 - 2011 Paisiblement, à la suite d'une lutte courageuse, Louise Marguerite Adams (nee Bernier) est décédée le 8 avril 2011 au Centre Taché à l'âge de 86 ans. Louise was predeceased by her parents, Judge Alexandre Bernier and Mme. Emma Bernier (Flanagan); her brother, Paul Bernier; and her newborn daughter, Frances Louise; and grandson, David. She is survived by her husband, Dr. Paul Vincent C. Adams; her sister, Madeleine Bernier; her daughter, Marie Theresa (Gordon); her sons, Paul Edward (Suzanne), Mark Alexander (Nancy), Christopher John (Susan), David Gregory (Adelina) and Michael Christian; and her grandchildren, Alexandre, Sophia, Jordan Paul, Matthew, Oliver, Jennifer, Christopher, Theresa, Kevin and Melissa. As a young child, Louise was a weekly participant in radio drama broadcasts. She was a central figure in le Cercle Molière, performing in two Canadian Drama Festivals under the direction of Mme. Pauline Boutal in Montreal in 1949 and the following year in Calgary. She was a co-founder and the first president of Pregnancy Distress Service (subsequently Pregnancy and Family Support Services). With her husband she was a co-founder of SERENA Manitoba. In subsequent years, she travelled to Montreal and Toronto as the Western Canadian representative in CBC religious programming. She became a western representative in Family Action , an organization supported by the Canadian Catholic bishops and the Knights of Columbus. In her fifties, she taught Adult oral French at St. Boniface College. Despite these multiple interests, Louis provided an interesting and stimulating home environment for her children and their numerous friends. A friendly and welcoming home always provided vibrant conversation and activities. Despite the many disruptions caused by her husband's irregular obstetrical hours, her faith, her love of language and her outlook on many positive aspects of life sustained her and those about her. She will be greatly missed. A Funeral Mass will be held at 11:00 a.m. on Tuesday, April 12 at St. Ignatius Church, 255 Stafford St. with reception to follow. In lieu of flowers, donations may be made to Pregnancy and Family Support Services, 555 Spence St. R3R 2R9 Condolences may be sent to www.desjardinsfuneralchapel.ca DESJARDINS 233-4949 1-888-233-4949