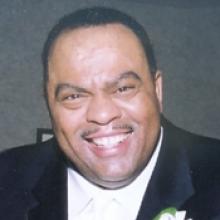 WINSTON WASHINGTON MOXAM It is with immense sorrow and overwhelming sadness that we announce the passing of the most magnificent man in the world. Winston Washington Moxam passed away peacefully at St. Boniface Hospital with his wife at his side on April 13, 2011 at the age of 47 years. Winston will be greatly missed and lovingly remembered forever by his wife Joy. Remaining to cherish Winston's memory are his mother Adora Moxam, father Dudley Moxam, sister Orlene Soares (George), nieces Carissa and Serena, and sister-in-law Judy Rainville. Left to mourn are Winston's aunts Lillian Andrews, Adeline Clarke (Clarence), Jenny Mathews, and Rose Vaughan. Winston will be sadly missed by his cousins David Andrews, Garth Andrews (Claudette), Quinton Andrews (Leah), Stephen Andrews (Brenda), Edmond Clarke (Margaret), Michelle Clarke, Camilla Kalinowsky (Mark), Carolyn Majors (Ron), Karen McGale (David), and Janice Reid, as well as numerous little nieces and nephews. As a testament to his infinite kindness and magnetic appeal, Winston will be fondly remembered by several life-long family friends, numerous dear friends and a considerable number of colleagues. Winston was born in Birmingham, England on August 7, 1963. His family moved to Jamaica a few years later and eventually settled in Winnipeg, Manitoba. Winston graduated in 1987 with a Bachelor of Arts degree (Anthropology/ Theatre) from the University of Winnipeg and a Film Production Diploma from Confederation College in 1989. His career as a filmmaker was as diverse and colourful as his outlook on life. As a Black filmmaker, he focused on many issues faced by the Black community and on racism. He was a consummate professional and an extremely well respected Director, Producer, Writer and Editor. Throughout his career, Winston was asked to serve on many Jury Panels for the Manitoba Arts Council, Canada Council Media Arts, and the Winnipeg Film Group. Winston was also an award-winning Director, with his final feature film (Billy) garnering him the 2010 Human Rights Commitment Award from the Manitoba Human Rights Commission. His first feature film (Barbara James) was selected and shown in several film festivals - taking him all the way to Italy, Portugal, and Toronto. In 2002, it won Winston the Best Canadian Feature Film from the Reel Black Awards. His vast filmography included directing, producing and writing several documentaries (most notably the How do they? series for the National Film Board of Canada) and numerous short films (dramas). His documentary, From the Other Side, was the winner at the National Coalition for the Homeless Film Festival. As with every artist, Winston also had many pay the bills kind of jobs. He has served as the Director in Residence at the Academy of Broadcasting Corporation, the Cultural Liaison Coordinator at Video Pool, and as an Assistant Editor at CBC, CTV and NFB. He facilitated many filmmaking workshops - with his favourites taking him to Whistler and Ottawa. However, he will most likely always be remembered as the Projectionist at the Winnipeg Film Group (Cinematheque). All of these positions enabled Winston to focus on his true passion in life: making and directing relevant films that captured the human experience and regale the audience with images of great beauty and great stories. Winston was an extremely well liked individual, who possessed the ability to make anyone he met feel immediately comfortable and safe. His outward appearance of great strength masked the soft marshmallow filling on the inside. Winston was the kindest, caring and most decent man; one who would often share everything he had with anyone who was in need. He truly had a beautiful soul. His sense of humour was legendary and his laugh was captivating. In 2003 he met his true love, Joy. Their whirlwind romance created an extremely happy marriage that was full of love and devotion. Winston's greatest pleasures were to travel, watch movies, and fill his time by spending it with his family and friends. While he always enjoyed going out to new restaurants and be pampered in luxury hotels, his most favourite pastime was simply to sit in a sunroom on his favourite lounge chair and relax. A memorial service will be held on Wednesday, April 20, 2011, 11:00 a.m. at the Whyte Ridge Baptist Church (201 Scurfield Blvd; Winnipeg, Manitoba). If you wish to honour Winston's memory, please consider making a donation to your favourite charity and perform an act of kindness. Think of Winston the next time you watch a movie. An immeasurable debt of gratitude is extended to the extraordinary staff at the St. Boniface Hospital CICU and CSIU. The kindness, professionalism and compassion given to Winston will never be forgotten. Online condolences may be made at www.glenlawn.ca Glen Lawn Funeral Home 982-7550 www.glenlawn.ca