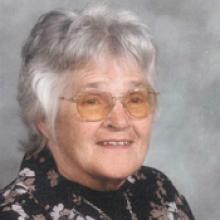 ANNE ETHEL (POYSER) PALLISTER B.A., M.A. Passed away on Wednesday, June 29, 2011 at the Lion's Prairie Manor just short of her 88th birthday. Predeceased by her husband Bill in 1989, Anne leaves to mourn her loss and cherish her memory her children and their families: Brian (Esther) Quinn and Shawn; Jim (Colleen) Bryce, Tess, Claire and William; Peggy (Ron) Mallory and Morgan Tidsbury. Anne also leaves sisters Win Degroot and Lorna Poyser of Winnipeg and in-laws Harley and Marie Pallister of Brandon and Jean Vankoughnet of Rocky Mountain House, Alberta; several nieces and nephews. Born July 12, 1923 in Merridale, MB, Anne Poyser moved on in her teens to pursue an education in Winnipeg. After graduating from Kelvin High School, Anne went on to complete her Normal School training. She then taught in many small schools including Thunder Creek, Beautiful Valley and North Ward in Portage. Anne married Bill Pallister on July 5, 1952 and settled at the Pallister family farm at NW 18-11-8W near Edwin. Anne never shirked from the hard work of a farm wife and mother: milking, preparing meals, gardening, knitting. Anne continued teaching at Rossendale, Beaconsfield, and MacDonald, but is best remembered for her nearly twenty years teaching at Yellowquill School in Portage from its opening in 1969 until her retirement in 1988. While teaching full time, Anne went back to university to achieve a Bachelor of Arts degree in 1973 and a Master of Arts degree in 1993. Anne has been a member of the Ruth Rebekah Lodge, Edwin and Trinity UCW's, the Portage University Women's Club, the Portage Senior Choir, the Lion's Prairie Manor Board and most recently made the Happy Birthday phone calls for the Herman Prior Center. Through all her endeavors Anne, from the time she was a young woman, was battling the pain of arthritis. Anne was extremely proud of her children and grandchildren and was known to brag, just a little, about their accomplishments in sports, business, community service, music and education. She has left a huge impact on her own family and an entire generation of grade three's at Yellowquill School. She will always be remembered and forever missed. Anne's family would like to extend a heartfelt thanks to the staff at Lions Prairie Manor and Portage General Hospital for the care Mom has received over the last eight months. Friends may call at the Omega Funeral Home for visitation on Thursday, July 7th from 7:00 to 8:00 PM. Funeral service will be held at the Trinity United Church on Friday, July 8th at 1:30 with Reverend Julie Baker and Wilma Shirriff officiating. In lieu of flowers, donations may be made to The Arthritis Society, Suite 105 - 386 Broadway Avenue, Winnipeg, MB, R3C 3R6. A tribute DVD in memory of Anne Pallister will be produced by the Omega Funeral Home, condolences may be sent to the family c/o Omega Funeral Home, 83 Royal Road South, Portage la Prairie, MB, R1N 1T8, 1-800-303-4621 or friends may leave a message of sympathy on our web site www.omegafuneralhome.com Dedicated to those we serve .