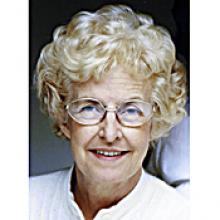 PHYLLIS MARGARET MUDRY (nee KELSO) March 8, 1926 - July 15, 2011 After a brief illness, with her family by her side, Phyllis passed away peacefully on Friday, July 15, 2011 at the Health Sciences Centre at the age of 85 years. Remaining to forever cherish Phyllis's memory are husband of 65 years, Nestor; children, Greg (Kelly), Tom (Barbara), Paul (Brenda), Katherine (Jeffrey); 11 grandchildren; four great-grandchildren and sister, Betty Keast. She was predeceased by her parents, George and Olive Kelso. Phyllis was born in Russell, MB and moved to Roblin, MB as a young girl where she excelled in school and athletics. She attended the University of Manitoba and studied Interior Design at the Faculty of Architecture. In 1946, Phyllis married Nestor. After a brief stay in Regina, they moved to Winnipeg where they lived for the rest of her life. As a mother and active member of the community, Phyllis led a busy life. Phyllis later became an entrepreneur with her own interior design business as well as a home décor shop. Phyllis was an avid bridge enthusiast, bowler, traveller, and home baker. She was renowned for her butter tarts. She was a great talker, who loved to converse over the dinner table with family, over coffee with her friends, and with interesting strangers Phyllis met on her long train and bus trips. She hated to fly. Despite severe visual impairment in later years, Phyllis continued to be actively engaged in her favourite pursuits. She was a source of love, wisdom, and strength for family and a wide circle of friends. A private family memorial service was held on July 19, 2011. The family would like to express special thanks to the Health Sciences Centre's I.C.U. staff for their wonderful care during Phyllis' last days. In lieu of flowers, donations in Phyllis' memory may be made to the C.N.I.B., PO Box 8000, Station Main, Winnipeg, MB R3C 9Z9, or charity of choice.